So, I have built the flow for sending reminder emails to the approver if they don't approve it within a particular period. What I do not like is that the all the reminder emails get sent separately. See image below: 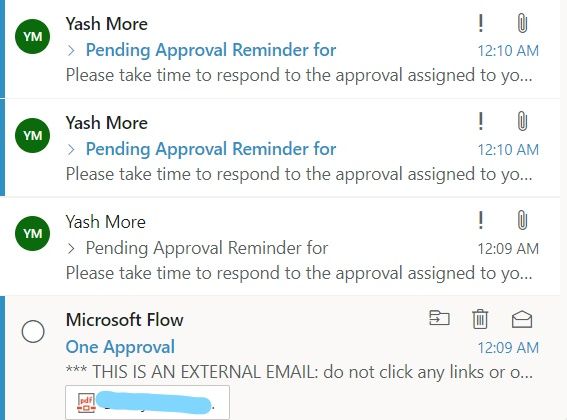 Is there a way where the reminder emails are in reply to the first approval notification flow? Like a usual email conversation thread. And the next reminder is a reply to the previous reminder. Can this be done some way?

It's basically how the approval process would've looked if done manually. I send an approval email, approver doesn't reply, I reply on the same email asking for a response, then again and again the way it becomes a thread so even the approver can check when was the first time he received the approval notification.

I was reviewing your request and found another communities post where the user was trying to perform a similar process. I am going tp share below. Let me know if this works for you, or if you have any questions.

Community Support Team - Jordan McCowan
If this post helps, then please consider Accept it as the solution to help the other members find it more quickly.

Helper II
In response to jordan-mccowan

Thankyou for replying. The link to the post you've shared to is about sending multiple emails to the approver post a certain amount of delay. I've figured that out.

What I want to change is, the 'reminder' emails get sent separately as new emails for every reminder. What I would like to have is that the reminder emails are sent as a reply to the original approval notification email. This way, it becomes an email thread. And whenever the approver opens a reminder email, he/she can scroll way down and see when the was the approval created. I hope that clears it.

In short, reminder emails as a reply to first approval notification email and not as separate emails (like in the image attached). Thanks!