I've need to calculate the difference in minutes between a SharePoint created Time and the time of 6.00 at the same day.

For example when a SharePoint list item is created today at 05:45 I'm expect the 15 as result.

But that's not working/ give an expression error.

Does anyone know how to get the right results?

Can you please try the following ?

1. CreatedDate Time expression - I'm keeping it as 6 am :

3. Subtract and convert into Minutes 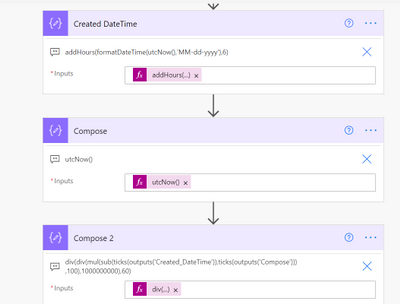 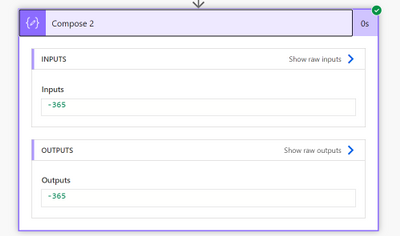 Hope this helps you and you will get some idea.

Copying it out into Notepad++ it looks as follows;

namely, on the second line starting 'ticks' that should end with a , and not a '

and your Div and Sub controls aren't closed, each function should be closed with a ), so typically, if you're running 3 functions you may see ))) at the end of the Power Automate.

I can't speak for the functions themselves, but hopefully the syntax will get you somewhere.

Helper V
In response to HaydnTH

You right about the closing functions. But also when I've fix it, it's told me that it's not correct:

Maybe someone Else know a solution?

Seems to be some syntax error in the expression.

1. The UTCnow should be called as utcNow()

I've correct the syntax issues and apply in your flow and it should work without any error. Kindly double check the logic before applying into production environments.

Thank you for your input! That's helping me in the right direction.

But it's not exactly what I need, maybe my question wasn't full complete:

What I need to calculate is the time difference between the created time and 06:00 AM in the morning.

Do you know how achieve that?

Anyone who know how to solve this?

What in case, if the item is created at 6.10, then difference is -10 mins ? Do you want to just the time difference ?

Can you please try the following ?

1. CreatedDate Time expression - I'm keeping it as 6 am :

3. Subtract and convert into Minutes

Hope this helps you and you will get some idea.

Thanks! That's helping! Now I only need to convert it to the correct timezone and I'm done! (I'm in timezone Amsterdam, so I've a difference about 2 hours.)