I have two custom entities in my CDS. One entity is Tracker, the other entity is Details. Details has a many to one relationship with Tracker.

Details has a lookup to Tracker, also named Facility(cr5be_facility), that does a lookup to the Tracker entity to pull the name the details are about.

I'm trying to create a flow, that when a new record is added to the Details entity, a field on the Tracker record it's connected to will be updated with a count of the number of records in the Details. This count should be based on an option set field on the Details record named Survey Outcome(cr5be_surveyoutcome).

So, for each choice in Survey Outcome on the Details record, I intend to have a count of the number of those Outcomes, on the related record in the Tracker entity.

Hopefully I explained that clear enough someone can understand what I mean.

I've tried to do a Flow that would compare the Facility fields, but it did not work. I assume it's because one of the Facility fields is a lookup to the Facility entity, where the other lookup is to the Tracker. While they have the same text value, it seems like the GUID is what's actually getting compared; which of course is different. 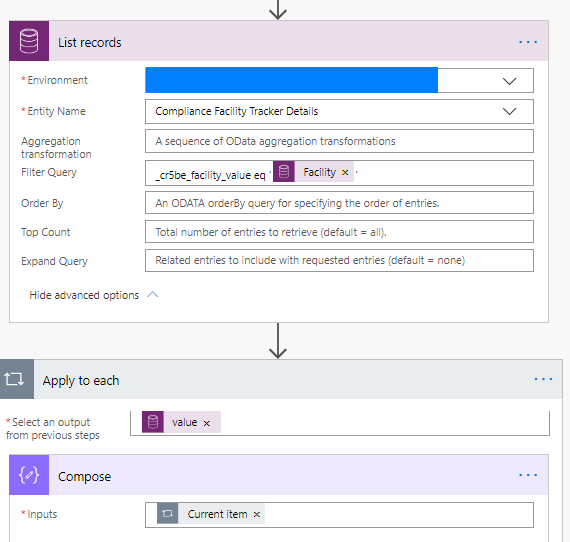 For lookup fields reference. Check out my solution on this post:
https://powerusers.microsoft.com/t5/General-Power-Automate/Filter-Query-in-List-Records-not-working-...

Note that in my example I am using Dynamics 364 connector. The same will be applied with the CDS connector.

If this does not help you, could you try and give some additional information.

The expression to count the number of the records:

@Jcook I'll give that a look, thanks.

@v-alzhan-msft I don't think you understand what the issue is. It's not "how am I going to count them". It's the relational part.  Basically, all the stuff I described in the post.

@Jcook Unfortunately, I was right. While the labels are the same, the values are not. Both fields are named Facility, both are lookups, but one is on the parent (Trackers) entity, and the other is on another entity (All Facilities). So the GUID's don't match.

Is there any way to compare the displayed text values instead of the GUID?