Do Until SharePoint field populated

I'm struggling with the Do Until action, and hoping someone can give me some guidance.

My goal is to wait until an "Assigned To" field is populated in a SharePoint list, and then send an email. It seems this should be relatively straight-forward, but my flow is not waiting for the field to be populated. I configured the flow to wait until the Assigned to Email contains the "@" character (I've tried a couple other variations, and also on a text field, and none behave as expected). Below is the configuration of the Do Until step:

Any tips on what I'm doing wrong?

This is probably no help, but maybe someone with Microsoft will see it. In SharePoint designer, if it was a text field you could set it to "Is not empty". That doesn't seem to be the option in Flow though. Maybe that option can be added?

I haven't had to use a "do until" field yet so can't be any help, sorry. Will be following because I know I will need this in the future.

Anonymous
Not applicable
In response to BridgetZ

I appreciate that suggestion - that's actually what I've already done. However, I'm trying to learn Flow and would like to build as much as I can with Flow rather than Designer. If I figure find a solution outside of this thread I'll be sure to post an update for you.

Advocate IV
In response to Anonymous

Same here! Learning a lot just looking at the questions in the Boards.

Could you please take a try to switch the Do until condition in Advanced mode, then modify the formula as below?

) with the one showing under the Advanced mode of your Do Until condition.

Apologies for the delayed response. I tried your solution, but it does not accept the expression as a valid template language expression. Here is my expression:

The specific error is: "The template validation failed: 'The property 'expression' 'Not( Empty(TriggerBody()?['AssignedTo']?['Email']) )' of template action 'Do_until' at line '1' and column '1379' is not a valid template language expression.'."

Did I miss something here?

Anonymous
Not applicable
In response to efialtes

@efialtes thanks for taking a look, but AssignedTo is correct. My field does not have a space in the name.

Kudo Kingpin
In response to Anonymous

I've tried a similar approach, the following WDL expression has been accepted by Flow when saving it. Please note I am

evaluating a first level column, so does not exactly match with the scenario you want to implement 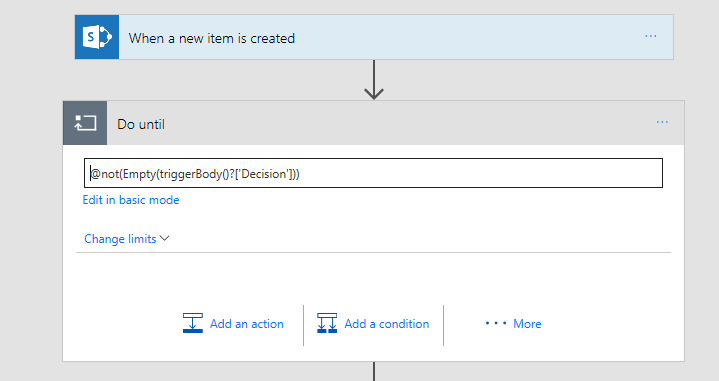 If you manage to save you flow without errors, please note I've executed my example flow by adding a new item to the list, leaving "Decision" column empty, but it seems it is populated inside the trigger as null, so the Do-Until condition is matched the very first time Flow evaluates it (not what I was looking for)

If you face the same problem, I guess coalesce function may help (https://docs.microsoft.com/en-us/azure/logic-apps/logic-apps-workflow-definition-language) since it helps you to replace Null by whatever convinient string

Hope this helps more than my first answer

I'm also having problems with this... It was much easier with SP Designer and the 'Wait' and 'Is Not Empty' options.  There should really be a more straightforward way in Flow to do this.  I'd rather not build things in SPDesigner anymore as it's clear that MS is moving away from that as a tool.  Can anyone help resolve this?

edit to include a screenshot of my flow.  I think we're trying to do a similar thing here.  Thoughts? 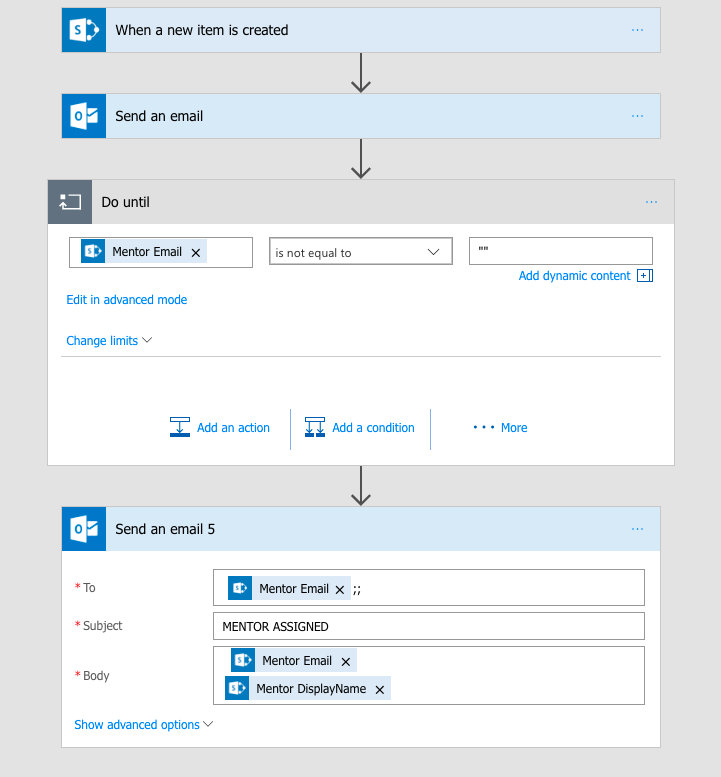 Helper I
In response to PSUlion01

Does anyone already have a simple solution for this?

My issue was similar in that I was waiting for a specific requirement to be met before I then continued the Flow.

I also used null in the expression, rather than "" or other text. See image below

The formula for "DelayUntil" in the loop is below:

if(
greater(
utcNow(),  addHours(startOfDay(utcNow()), 17)
),
addDays(
addHours(startOfDay(utcNow()), 8),
1
),
addMinutes(variables('DelayUntilPrev'), 5)
)
The if rule checks if the current time is after 1700 UTC. If so, it then sets "DelayUntil" to 0800 UTC of the next day. Otherwise, it sets "DelayUntil" to 5 minutes later. This avoids using up "Counts" when a possible return value would only be expected during standard business hours. You may need to adjust this for your timezone, working hours etc.
Message 12 of 12
1,372 Views
0 Kudos
Reply