So I thought I had solved my issue with double quotes.  It is very easy to replace with the escape identifiers I need.

This results in valid JSON.

But Flow is still saying it is an invalid character.  I finally narrowed it down by getting rid of everything else.

What I don't understand is why Flow would complain but no JSON validator programs complain.

So I started thinking, how to write this replace in Flow?

Looks like it puts the escape characters in but then puts double quotes around that, in flow that would be single quotes I think.

But how do I know where a quoted word starts and ends in order to wrap in single quotes?

And in JSON would I have to then escape the single quotes to?

So does someone know:

- In JSON in Flow say in a body of a "Send an HTTP request to SharePoint" action, how would I put a quoted word in there?

PS - I use a compose ahead of the HTTP request to do the "Replaces".. so I wonder if Flow is automatically doing something else behind the scenes?

With adaptive cards, I have seen this issue when I directly copied the JSON from the card editor. However, if you initialize a variable of type object and assign the value to it instead of doing a compose, it should work. And if not, you might have to escape all spaces and enter keys as well for this to work.

I initialized and set a variable of type object with my text that includes a double quoted word.  "Test".

Then tried adding that variable to my body of the HTTP Request.

It wouldn't allow me to add it.  Doesn't even show up as an option to choose from.

So I changed it's type to string and then it allowed me to add it.  I then tested that and it still failed.

PS - I am escaping everything else fine, like new lines.  Only seems to have troubles with the double quotes.  Even though I am escaping them correctly \"  Flow still wants '\"Test\"'

If you want to add quotes into the "Send an HTTP request to SharePoint" action, use "\"Test\"" will be correct: 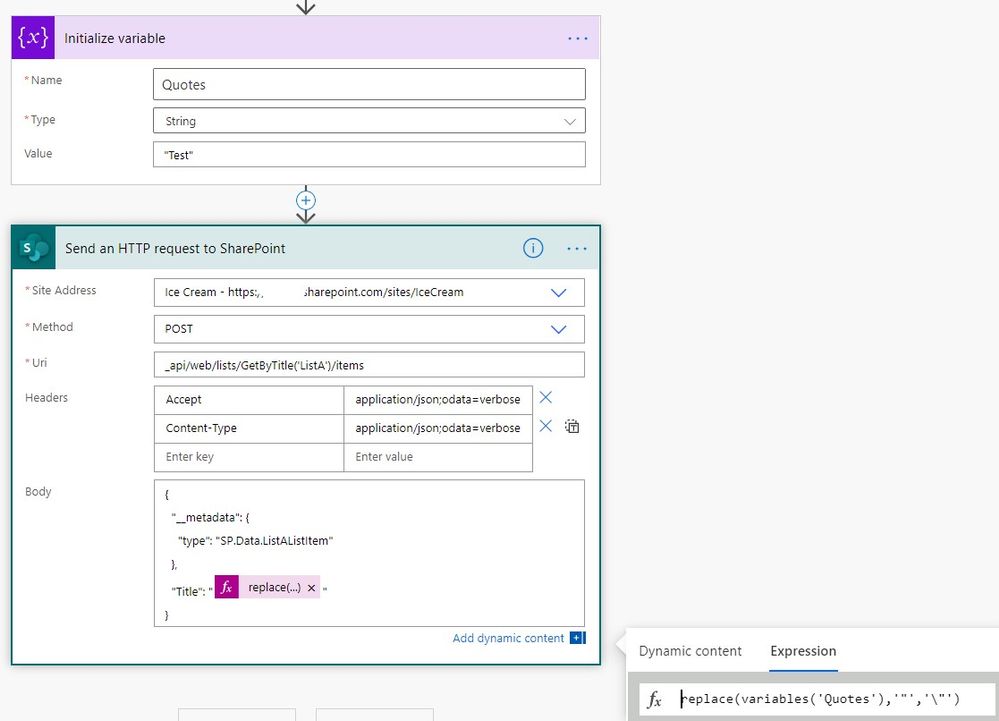 yep I know this would be correct...

Take a quoted word and escape it correctly?

I can't just say replace " with \"  because it wants the quotes in different places on the front and back end of the quoted word.

Check out the announcement of Power Platform content at Microsoft Ignite!