I'm trying to list all active records that have a field (ec_noc) that has either value of '2' or '3'.  I think what I need to do is to use the connector for List all Records and put an expression into the Filter Rows field.

The two expressions that I've been able to come up with so far (and are not working) are:


Would greatly appreciate feedback on this!

The other thing I've been trying to do is to consider the Choice field as its own entity.

I think the issue is that while there is an option set/choice field that is on the Certification entity but it reads the values from a global option set/choice field.  The global aspect means that the values themselves are on another entity/record.   Previously, before OptionSets were renamed to Choices, we found that we would have to do a separate Get records of the Choice Field for NOC Type.

Looking a the old customisation view to see this as separate to the Certification record:

This screen shot shows where I'm trying to list the entities for the choice/option set field.  It is still called option set, rather than choice.   I haven't figured out how to filter this as the name is ec_noctype (the same as on the certification entity).  But this is where I"m at right now. 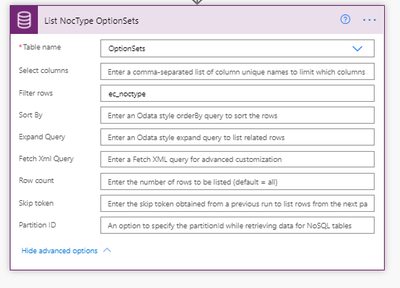 Hi @ViditGholam ,
Just thought I'd let you know that I managed to get the fetch to work.  When the row for the ordering attribute was removed I was able to get the flow to run through the condition successfully.  So the fetch below is what was successful.


Thanks for all your suggestions and guidance on this, it was really appreciated.

Continued Contributor
In response to Tarjani

Hi @Tarjani  I am not really sure if it will take the values from the global option set as you mention the entity name and id in the Fetch XML.