I have a similar problem.

My scenario was super simple:

Spoiler
Error. File blocked by myself.

Tried a differente approach by replacing the original file at the begining of the process but now the file is blocked.,

I do think Flow engineers should take a more serious approach on excel connectors, since they released a preview with a bunch of mistakes and i do mean mistakes instead of Beta testing. For instance if you try to create a file from a excel file filled by inser rows you need to delay the flow, otherwise you will get a trunced version of the file. Just as an example, but there's more.

I've been building a flow using excel connector for a week and its a completely nightmare.

Dear, you need to use Excel for business. for example:
User Get Rows (Excel for Business), using this will not lock the file and after getting the rows you are not able to add or change fields in the Excel file.
You can find an example on my blog: https://blog.pronict.net/2018/12/06/ms-flow-05-buttons-excel-approvals-and-notifications/
Regards,

Sigh. I'm getting this problem too.. the retry mechanism in the Settings for the Excel Insert Row operation looked perfect.. but they don't work with this particular error. I've raised an Idea will will hopefully get some traction for getting it fixed/working with the table locked error.

I'm experiencing the same problem. There are many threads on this topic and varying suggestions

I have a Flow that takes an Excel spreadsheet from an email attachment and copies it to a folder on SharePoint.

That file is used for a Power BI dataset so the Flow also jumps into the file and creates a table using the Create Table - Excel Online (Business) step. This is so Power BI can see the data table.

A few days ago it was running and succedding 1 out of 3 times. The other two would fail with Error 423.

Currently the Flow is failing every time with 423 and the file has been locked for over 24 hours. I even removed the folder permissions in SharePoint for the account that runs the flow and SharePoint/Flow still thinks it has it open.

I also tried being clever and made the Flow create a new file each time with a stripped down UtcNow() expression as a prefix. Unfortunately the Excel connectors make you select a file using the file picker and you can't use a dynamic path which would include the prefix.

Has anyone had any luck with the 423 error?

A few other reference threads

I have the same issue as the original poster.  Others have added in issues with Excel (online) and locked files.

I believe the issue is with Flow not closing the connection with a file, even after a flow has completed.  Yet even when I create a file and use it for the first time, in testing, it is still locked before first use.

The file is created by flow, not opened by anyone.

Did anyone ever come up with a proper solution for this?

I'm running into a similar problem where I need to refresh a Power BI dataset (which is a published Excel workbook), however; the refresh keeps failing because it says the workbook is open.  This happens even though the Power BI dataset refresh is one of the first steps to run, and I have a 5 minute delay after it.  It's almost like the Flow is pre-staging the lock on the file or maybe it's failing to close the file when it completes.

Microsoft?? Heeeellllooooo?  Are you out there??? It's now 2020 and this issue is still plaguing (sorry, no COVID reference intended) users.  I can't create a table using the Excel Business Connector without a 75% chance that file gets locked for WEEKS.  I've seen posts that suggest the file will unlock after an hour.....simply not true.  And please MS community manager - don't suggest to us articles that talk about how to close a file, etc.  In my instance - my flow creates the file - NO ONE EVER OPENS THIS FILE - and Flow creates the table - NO ONE EVER OPENS THE FILE - and flow then LOCKS THE FILE with a 423 error.  Guess who is locked it?  ME.  Insert Obi-Wan meme (Of course I know him, he's me).  At this stage - even adding new files and trying to use those in the flow fails immediately. Zero workarounds.  We desperately need a real answer here.  Not a link to an article written 5 years ago about how to close a file or make sure no one has the file open when running your flow.....

After, i don't recall how much time since the first post, i still have the problem with the "locked file."

It's frustrating that no one looks into it. PLEASE MS !!!

I was creating a new Flow hopping MS already solved the problem.

I Have 2 excel files:

I was able to:

This is not limited to 256, if you are still having this issue IM me and I will send you the fix.

I have the same problem,

I have a test excel file, this file only have a table, I update the table with  flow and work fine but when  I try execute the flow for second time the flow fail with 423 file locked. I try too to extract before and insert post update the excel but continue fail.

I have found a work around to this and other systems "locking" files.

If successful set VAR above to "False"

If not then do a delay for 1 minute (Or whatever)

The result can be a flow running for  awhile, but it wont do the annoying fail.

Thanks for your answer, how can I know if the control if succesful?,

I have done the next;

I tray again with on error event for delay path  and work fine. 👍

I was facing similar issue for a simple email trigger with link to Excel file uploaded to a SharePoint library. On clicking the link, the file opened in Excel, but there were 2 extra message bars - one stating file is locked for editing and read only and other stating there is a new version of file on the server - and both message bars asking to save a local copy to save changes.

I was trying to fix the new flow only as I had created several copies linked to several folders, and realized the issue later.

What worked for me is ... in the SharePoint library where the file was being uploaded, under Settings>Versioning settings, I enabled "required check out for editing". After that the two message bars are not coming anymore on opening the file.

It seems the flow is opening the file and closing, and without check out enforcement, this is causing a newer version to be created in SharePoint and leaving the original version locked..leading to the message bars in Excel.

I found one way to eliminate the issue of file being locked.

Background: I have an Excel file in a SharePoint Library. Using this file, I need to update a SharePoint List in the same site. Once the data is added, the file must be moved to Archived folder in the same library. For testing, I did not include the part of adding the rows to SharePoint list.

Assumptions: My file has only one worksheet with one Table. For multiple sheets, you will have to to either use Condition or loop through each.

2b. Get Tables (using File Full Path from step 1) 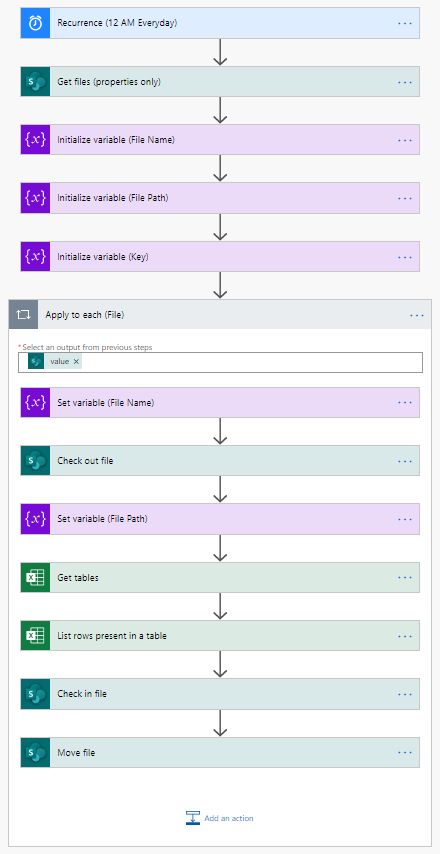 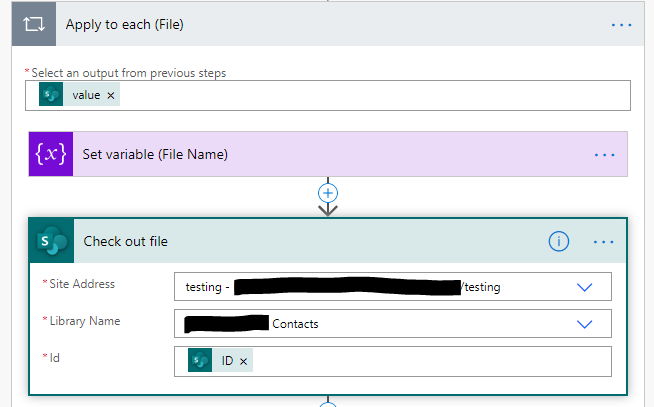 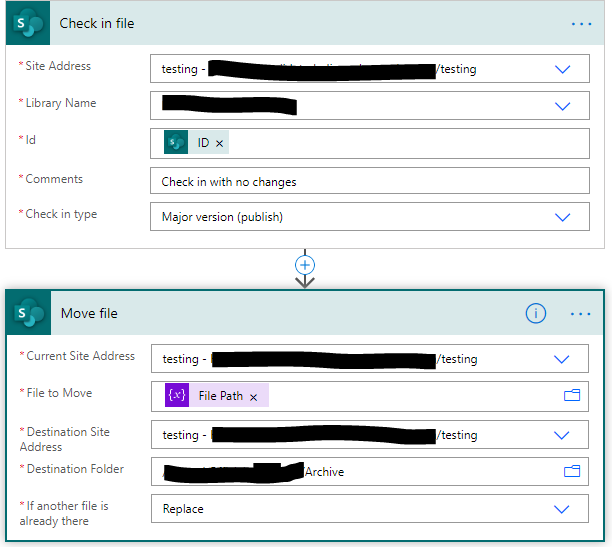