I'm working on a Flow that checks three columns in a Document Library when a new document is loaded. The goal is to have it wait an hour to send an email to the uploader if no properties have been updated. That part was easy to do. However, the issue becomes after that portion. The next thing we want it to do is to then check every day for 5 days if any of those columns have been updated.  I inserted a variable and a Do Until and it will send the email, but it isn't checking to see if any of the columns have changed.

I've included what I was doing with Do Until - all settings have been moved to minutes for testing and right now I'm only testing with 1 of the columns.  In this example I have the Convert Time zone as it is part of the text that is generated in the email reminder that is being sent. 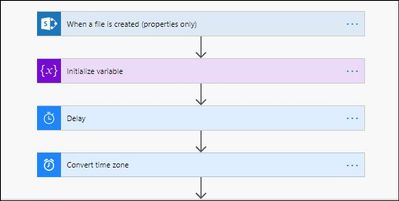 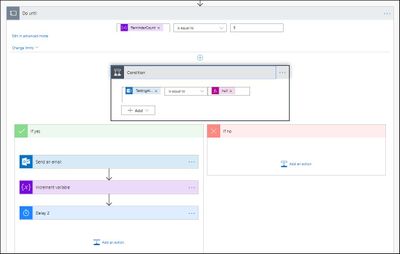 I then removed the "Do Until" and made it look for Condition and then after that step, looked at the Condition again. During testing, I changed the Column to a value when it was between these two conditions, but I still received the second email. 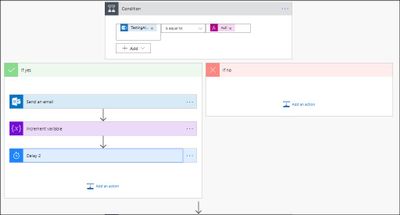 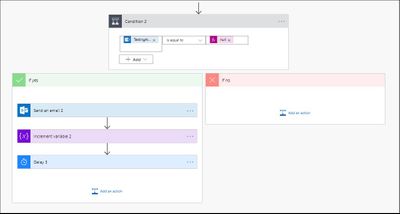 So I then added in a check back to SharePoint between these two Conditions. In testing, this works, but this is an awful lot of setup since I'm supposed to have this occur for 5 days.

Do I really have to duplicate this "Get file properties" and another Condition 5 times in a Flow to have it check this for five days? I would think there should be an easier way to get this to loop back, but the Do Until was not doing it.  I even put the "Get File properties" within the Do Until - first as the first step within it and then at the end and that didn't work.

Go back to the do until scenario that flow looks OK to me.

What you need to do before the condition is to retrieve the same item i.e. using "Get Item" this can then be used in the condition and following actions rather than the original item values provided to flow when it was executed.

If you want to check if the property value has changed, it is recommended that you create a new Flow to implement this requirement.

First, check if the Version number is equal to 1.0. If it is not equal to 1.0, check whether the value of the specified field changes.