Flow to copy, Amend or Delete calendar entries in O365`

I am looking for a method of monitoring a web based calendar (from a 3rd party) for changes and replicating these in my primary O365 calendar.

I have built the flow that appears to be most logical but it fails, The sync time between O365 and the external calendar is Approx 3 hours which means testing is somewhat disjointed (Can this be reduced at all?), so we have moved to testing using the inbuilt "Birthdays Calendar" in O365 for speed and to rule out the issue being with permissions relating to the web calendar, but get the same failure;

The flow I have set up is;

When an event is added, updated or deleted (V3)

Calendar id is Birthdays (Selected from the drop down)

If I create the same with a "create" entry output it works fine but id outputs of  "Modify" or "delete" are used on their own or as part of the Update Event output I get the same error.

Can anyone please assist with this?  I am new to power flow and would like to get this working as it is holding up a larger project we are trying to deploy.

Many thanks in advance

Let see the below links can be helpful or not. If not please update.

@abm Thank you for responding.

Permissions on"Calendar" are set to people in my organisation can edit.

The permissions on Birthdays or the 3rd party calendar can't be edited.

On Birthdays I can write and delete evens so have full permissions to that and on the 3rd party, this is read only.

The error is coming up on the output path which suggests that the "Calender" is the issue, but changing permissions here appears to have made no difference.

"Calendar" appears to be my default calendar already and both lists come up with the same order when I build the flow.  I am sorry, but I am unsure what a drop down control is or how to create it, so this has not been attempted.

Please find below my flow and the error received. 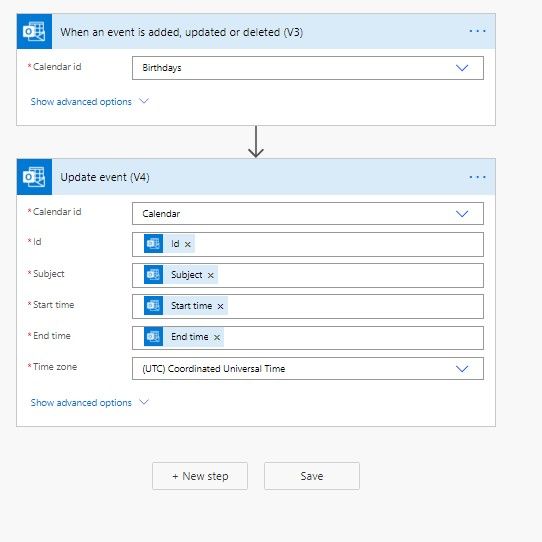 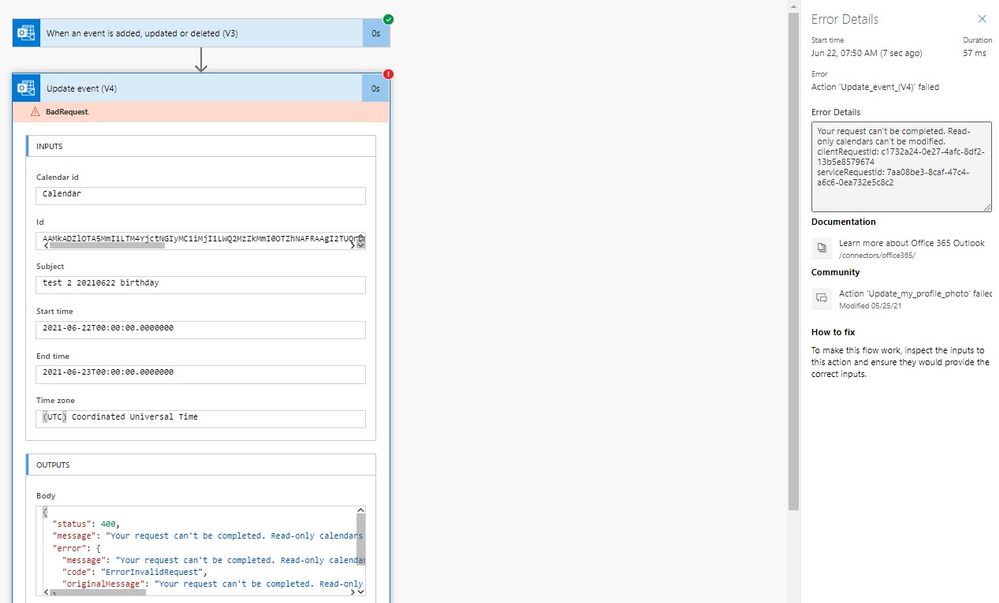 Thanks for your time and assistance yesterday.  The changes you made to the flow far exceeded where I woudl have go t to.

I have asked our Admin about permissions and wait to hear from then.

The issue with not having permission to delete using the flow (Calendar reports as being read only) is a strange one when I can can create and delete manually and we can create using the flow - hopefully it will be a simple fix and I will keep you posted.

Thanks for your update. Once the permissions are sorted test again. If not raise a MS support ticket for this. Explain about you can manually create and modify using another flow.

@abm Thanks for all your help with this.  After many hours on support with MS I am at the point of throwing in the towel and just changing the software that we were using, but wanted to give you an update on this as there are several things going on.

Firstly, we need to start with the create function which worked perfectly - when and event is added in Birthdays (source) - create in Calendar (Output). 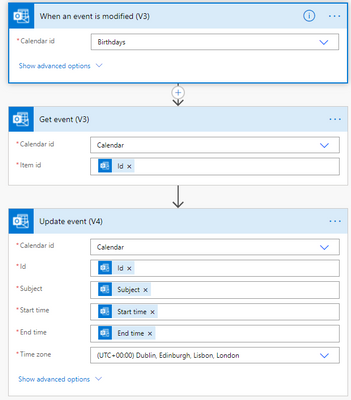 We were getting an error to say that the calendar was read only despite being able to read/ write in the output within outlook online.  This stumped us when we spoke and several MS engineers on both Powerapps and O365  support.

There are 2 issues here

1 - the get event function looks for the event ID from the source calendar (Birthdays for our test) then tries to modify the same event in output (primary calendar in this case).  However, during the create process the new event in the output has a different ID.  The system should flag this as an ID error as  the ID does not exist in output but there is a glitch in the software that does not flag this up as an issue.  The process should have stopped here with an ID error

2 - As the event id is in the source - the process then tries to update the event in the source (even though we have entered for it to be updated in output.  This is where the second "Glitch / issue" comes in. as it shoudln't have tried this.

Whilst I have full read / write permissions for the Birthday calendar in outlook online, the flow uses Graph API to make the changes, and the GraphAPI permissions say that I don't have edit for Birthdays so we get the error message that the calendar is read only.

Whilst we can change the Graph API settings to be Edit =True, this does not help as it is still trying to write to the source calendar and not the output calendar required, so isn't something we will pursue.

When created in Source - create in output - get and write the IDs for both both the source event and output event in to an excel table, where  they will be used to look up for future changes

It was thought that this would probably need to be set up for each user with their own record table and so will be horrendously long winded to manage and so probably not worth progressing with.

I have also discovered that the latency experienced in Outlook.office.com on subscribed calendars is generally around 3 hours but that Microsoft's official line is that that they can take up to 24 hours to update.

Thanks again for your help on this - just wanted to let you know the findings in case you come across some of these erroneous errors again.

Thanks a lot for the detailed explanation. Definitely this feedback is very useful for the community.