I am trying to create a Flow to save Message Center messages in SharePoint list is giving error on Duplicate messages. I had this flow earlier which was fetching data from Office365 API's which is now deprecated, which is why I am building it from scratch using Graph API.

Three stages I have divided it:

Channel the data in right format from JSON to SharePoint list.

Make sure, no duplicate message keeps flooding the List.

The first two stages are all good. I can save messages in a SharePoint list. But then I noticed, if I leave it at that, there are lot of same duplicate messages updated with the same ID number.

That is when I tried to filter the messages from the existing SharePoint list & its failing ever since.

Earlier, when I used Office365 API's to get messages, I had the same issue, but setting SharePoint Column with Unique vales, helped me stop duplicate messages. The same formula somehow does not work this time.

Meaning, because it cannot save Duplicate values in SharePoint it will not allow the rest of the flow to run. If i remove the condition of comparing & filtering duplicate values, then all data gets saved in list perfectly, with all sorts of Duplicates.

Here are some details:

The condition area with SharePoint item creation looks this way: 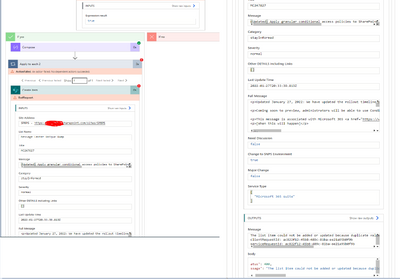 In the body it says: 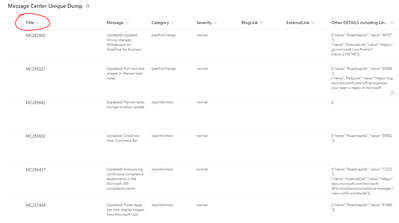 Any help in the right direction would be great.

I have changed the logic of my entire Flow. Here it is: 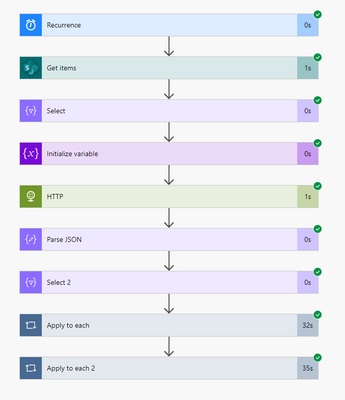 After that, I am calling Graph API, to collect all messages parsing JSON value & again selecting (Select 2) only the 'id' values from it. 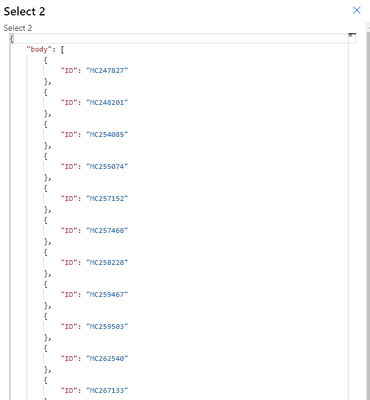 Everything is ok till here.

Then I apply the first condition, for each output from Select 2, where I compare both outputs(Select 2 with Select 1) & if unique, not duplicate, then save it to the Array variable. Here is how it looks like: 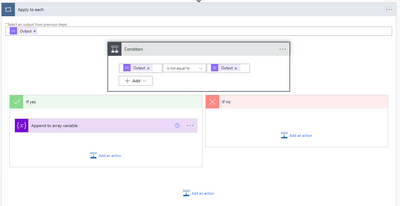 And this works, which will show data after I run it:

Next, I am setting up the final condition, that if the API collected value contains the unique value collected in Stored data array variable, meaning, if both ID matches, then create a SharePoint item in the list provided, as shown: 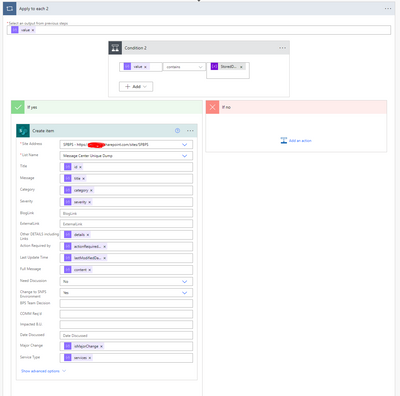 All is good.. The Flow completes successfully. But the Actual SharePoint list does not receive any new data. The list has data till 20th Feb. So I know there are new Unique items there, but its not creating items.

Any thoughts, where I am going wrong?