This is more of a question in principle. I have a flow where I collect information from SharePoint for an approval and a subsequent notification email. I have two amount columns and they are both essentially formatted as currency but one of them is a calculated field.

I'm trying to format the number in the flow as currency as well. I've both tried the formatNumber expression and the Format Number action. Neither works and the error message says that expect input is a number (integer or decimal) but provided was a string.

Interesting enough, it seems to work for the calculated column but not for the Currency column. I would have expected for both columns the value to be passed to Power Automate to be a number.

Everything I tried doesn't want to deal with the string. How can I format the amount into a usable format?

And how can I find out how the values come across? I'm using the same input in a previous action and as it displays 50.000000, that looks like a number to me.

Have you tried to use the Format Number action?: 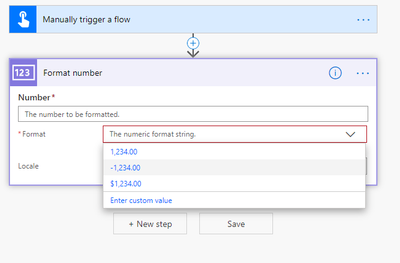 Did I answer your question? Please consider to mark my post as a solution to help others.
Proud to be a Flownaut!
Message 2 of 7
785 Views
0 Kudos
Reply

Yes, but that also expects a number as input and the amount seems to come from SharePoint as a string.

I think this action is really just the FormatNumber expression packed up ..

Price is of type "Currency".

Then, I can use the Format Number action to get the number in the desired format: 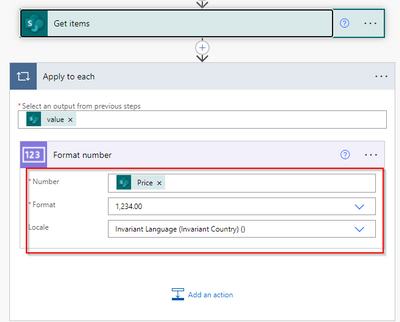 And the ouput is: 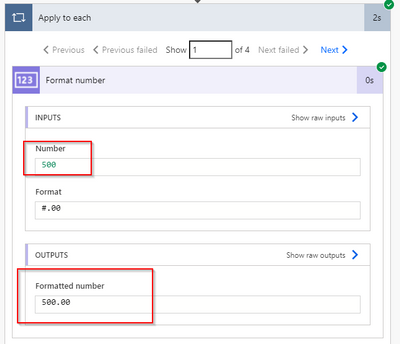 Did I answer your question? Please consider to mark my post as a solution to help others.
Proud to be a Flownaut!
Message 4 of 7
763 Views
0 Kudos
Reply

Advocate II
In response to fchopo

I have two fields, one is a currency field as you have above and yes, the format number action seems to work on that one.

The other field is a calculated field - formatted in SharePoint as currency. And Format Number doesn't seem to work for that. Hence my question, how do these column behave and why don't they behave the same?

Could you share the calculation expression in SharePoint? If you're using concat operations or mixing types, it will probably return a string value.

Please, use the VALUE function (microsoft.com) in SharePoint to return a number instead of a string (if you have permissions to do it!).

Did I answer your question? Please consider to mark my post as a solution to help others.
Proud to be a Flownaut!
Message 6 of 7
758 Views
0 Kudos
Reply

Advocate II
In response to fchopo

Below settings for the SharePoint column, with =VALUE() wrapped around it - made no difference however. 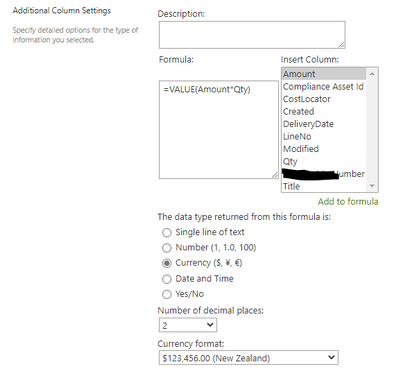 This is the flow run ... I really don't know what the problem is. The output looks like a number to me! 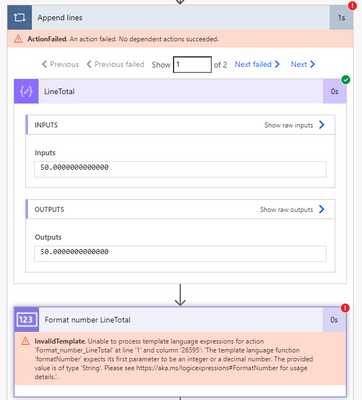 And here's the code. I had to add the Compose action because the calculated value Total is not available from the dynamic content. 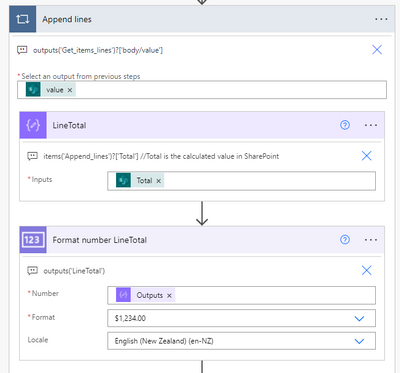