Gathering multiple files posted within a set amount of time from a trigger and posting a single message to teams.

Thanks to the help of @JohnAageAnderse  I was able to build a flow that posts a message to a channel when a file is posted in that channels folder structure on Sharepoint.  After doing some testing I realized that, while it works perfectly as designed, I am going to spam a channel if someone dumps a collection of files all at once which will cause far too much clutter.

My question is this: Is it possible to build a flow where the initial trigger is "When a file is created (properties only)" but then the flow waits for a set amount of time (say 5 minutes), gathers a list of any other files that were created within the same folder in that period and then posts a list of all of those files?  It would have to somehow prevent this flow from running for each file that is uploaded within that window while it is running on the first file that was uploaded or else I foresee it causing a cascading effect.

You are correct in trying to avoid spamming the channel 🙂

I suggest you use a Recurrence trigger action instead as your starting point.

Let say that it will be setup to run every 2 hours.

When it runs, your first action, after the trigger, would be to Get files (properties only) with a Filter query statement to include only files created within the last 2 hours.

With this, you can then collect all filenames and make one post only.

Hope this helps you on the way.

Memorable Member
In response to Chrono9084

Yes, it would. An action Get files (properties only) without specifying the folder, would get files from within the library no matter in which folder level the file is created.

You can start slowly by first building a flow with the Recurrence trigger and the Get files... action, then see what you get. When satisfied you build further.

Well, this is as far as I could get but I can't seem to get it to post the messages.  I have a feeling you will be able to figure out what I did wrong pretty quickly....I appreciate the help. 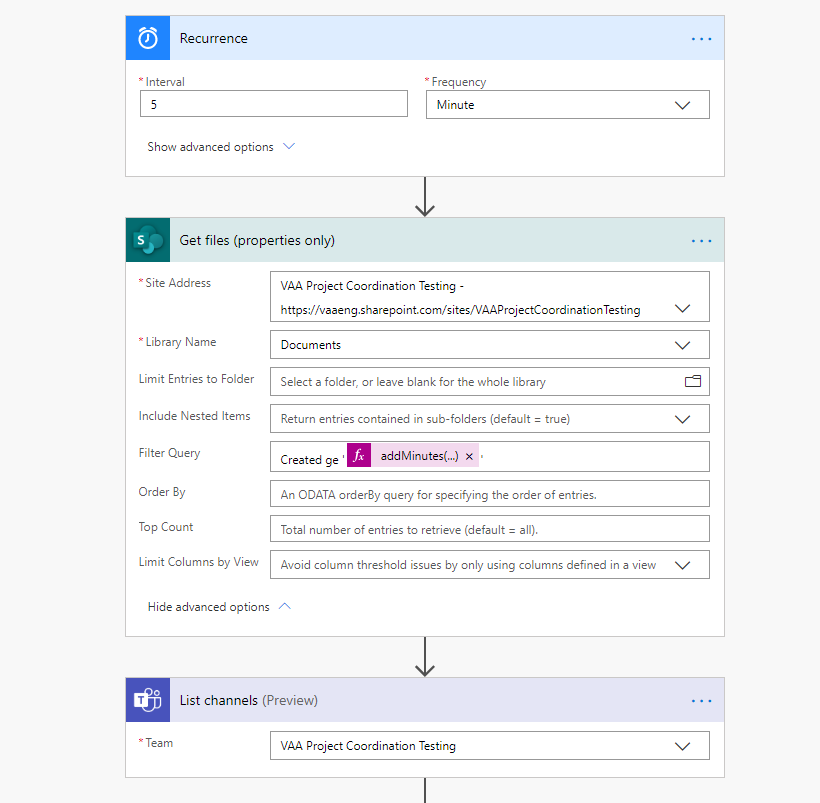 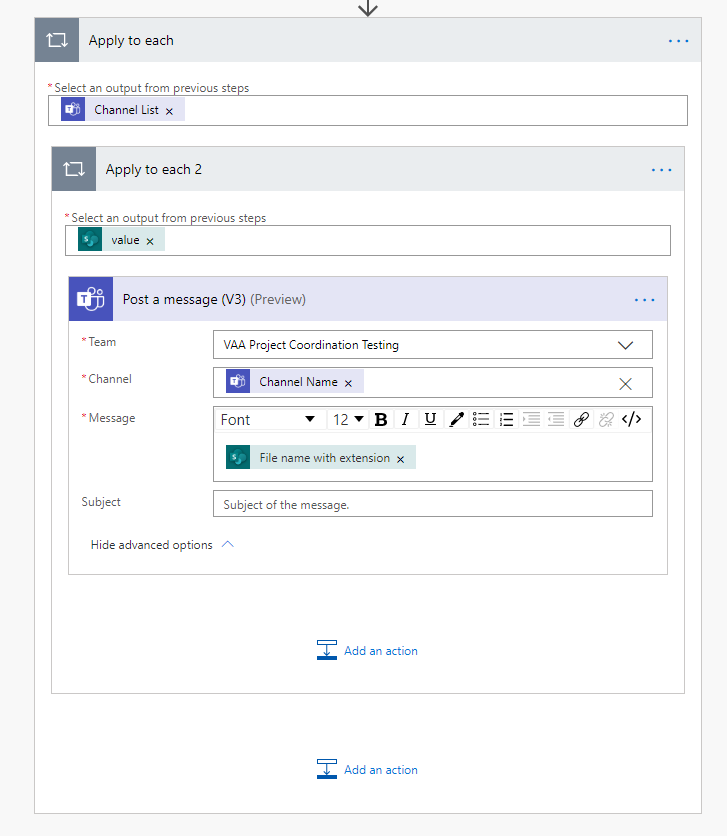 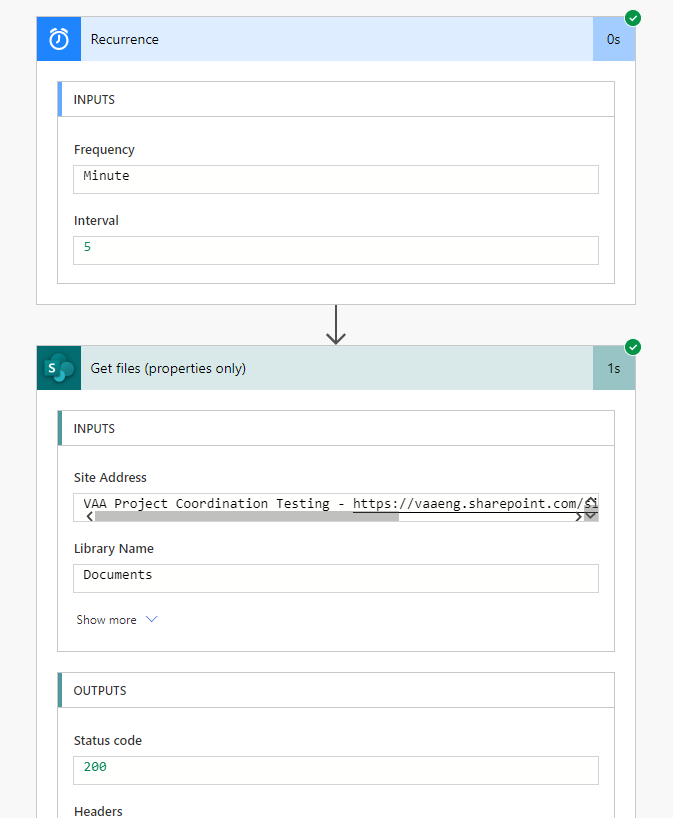 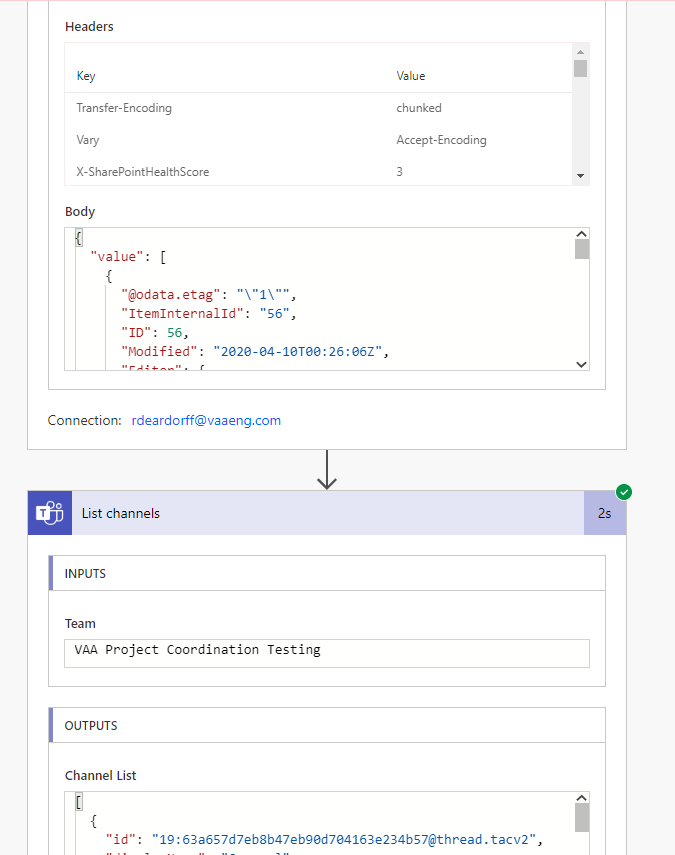 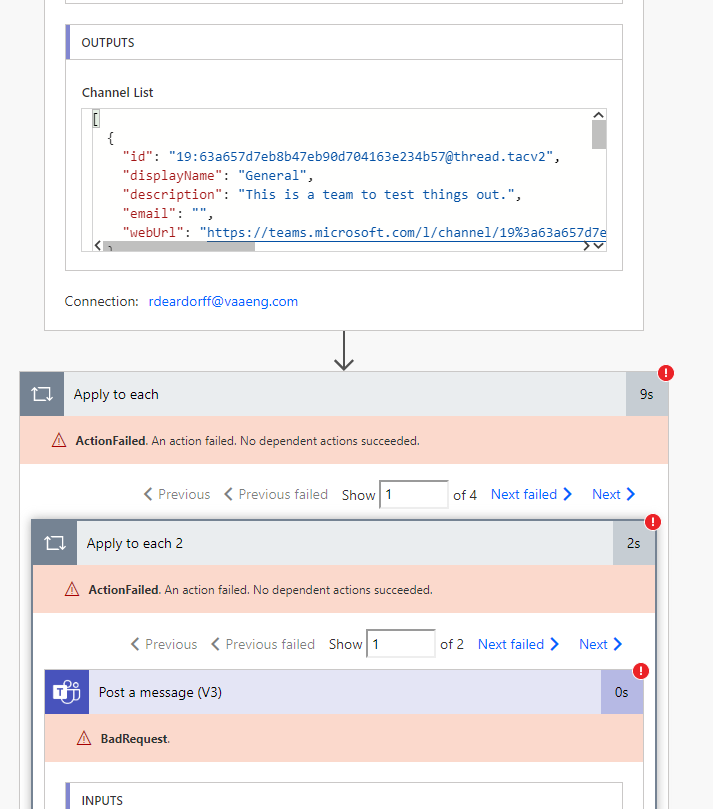 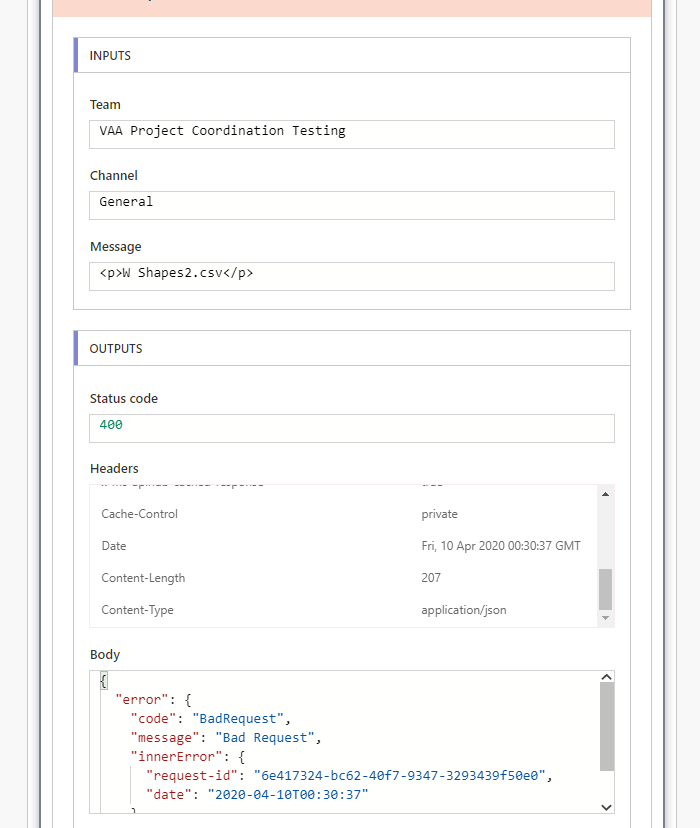 You should choose the Channel id dynamic content instead of channel name: 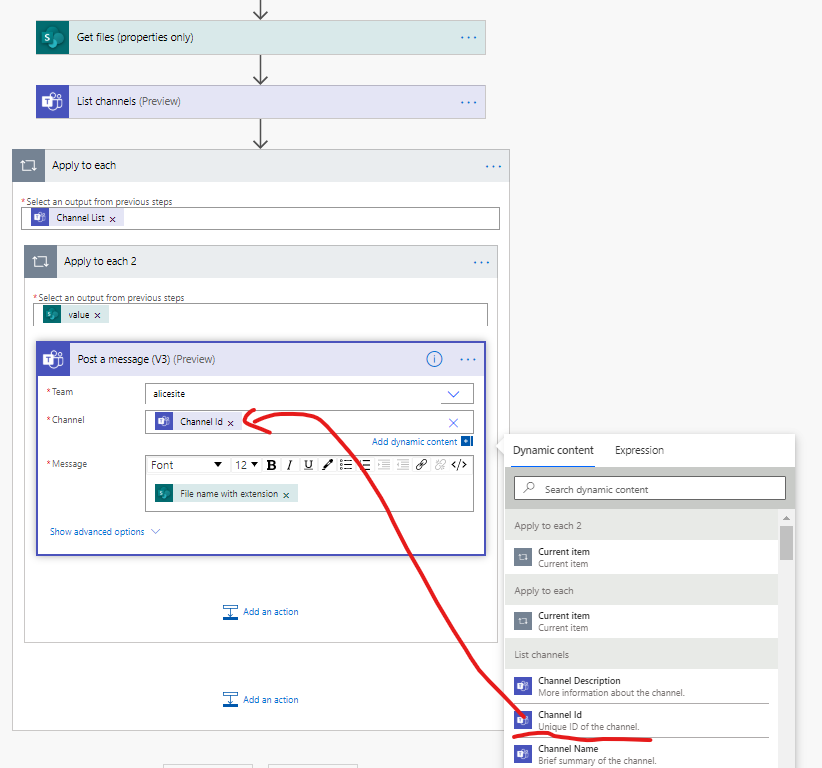 That worked and it is now posting messages but, unfortunately, they are all separate messages.  What method would be best to recombine those messages into groups per the channels they were placed in?

Edit: Actually....this ended up posting messages to all four channels in the team.  🤣

Edit #2: And I think I know why...let me fix something before I return for help.  In trying to simplify the flow I removed a condition that is required.  /facepalm

Ok so I was able to fix the issue where it was posting to all channels by (not being stupid and) reinserting the Filter Array that makes sure that Folder Path contains Channel Name.  Unfortunately it is still posting a separate message for each item uploaded.  I have a feeling this has to do with Flow creating Apply to each buckets but maybe I am wrong?

Memorable Member
In response to Chrono9084

I read the whole thread and it seems like you are nearly there, good work 🙂

So you need to initialize an array variable.

I would suggest you to explain more details about the requirement.

Do you want to send the email to each channel?

As soon as I am out of a meeting I will build a quick flow chart to, hopefully, better explain what I am hoping to do.  Thanks!!

The flow should be monitoring a team and all of its channels file locations on sharepoint.  Every 5 minutes I want it to look for any new files posted in that 5 minute window.  A message should be sent to each channel for which a file (or files) was created in that channels folder system stating what files were posted and where they were posted within the folder structure.  Optimally, if multiple files were posted, they would be grouped by file location.

The following messages would be sent:

Channel B would not get a message.

Channel C would get the following message: File coolimage.jpg was posted in Folder One by another yet some other person

Does that make sense?

This post is created 2 weeks ago and now you have the new requirement, I suggest that you could go ahead and mark the post as solved for the previous issue and then create a post with the new issue so we could see and better help you on the new issue.

Technically this is the same thing I was asking in the original post, I just didn't explain myself as well as I could have.  While @JohnAageAnderse  has helped me get pretty far, I have still not reached my original goal.