Get Row and send Email when specific Value

So i've got this big flow that does a lot of stuff, part of it is creating a list of counters in a table.

I now need to have a flow that runs daily and checks for a row with counters that have reached 2 or higher.

I'm currently just trying to figure out how to go about this at all, without creating a single task for every single column.....?

In order to do that i rotated the sheet by 90 degrees so all the counters would be in one column and i could get one attribute called "counter" but the thing i came up with is still pretty far off from doing what i want i think..... 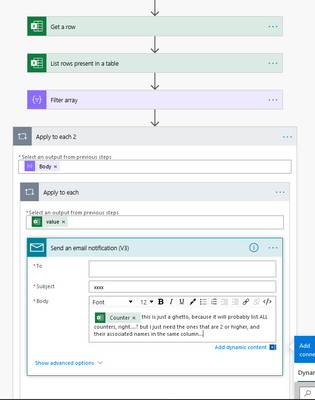 so this is the error message i receive: 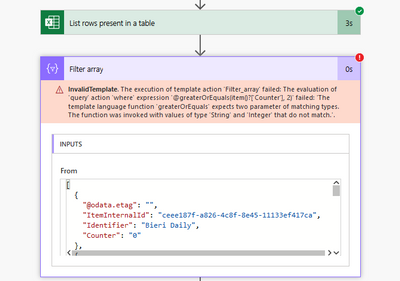 Using a int(counter) for a conversion doesn't really work either, i think because it tries to use way more data than just the counter....? i don't get it.

Any jumpstarts to my brain would be greatly appreciated.

Could you provide a screenshot of your expanded filter array action block? That's where it appears the error is.

Thank you so much for your response!

I sadly can't as i have it deleted by now because i tired different approaches. But the logic was something like this

But i think there's a much bigger problem here: the logical one.... i don't really know how to solve the entire issue