Get time difference in hour

Hello, I am trying to get the time difference between two dates from a sharepoint list item.

When I create a new item I am sending an email with the item's information.

Now I want to send in the email body the difference between StarDate and EndDate in hour format (hh:mm)

Any help would be great, thanks 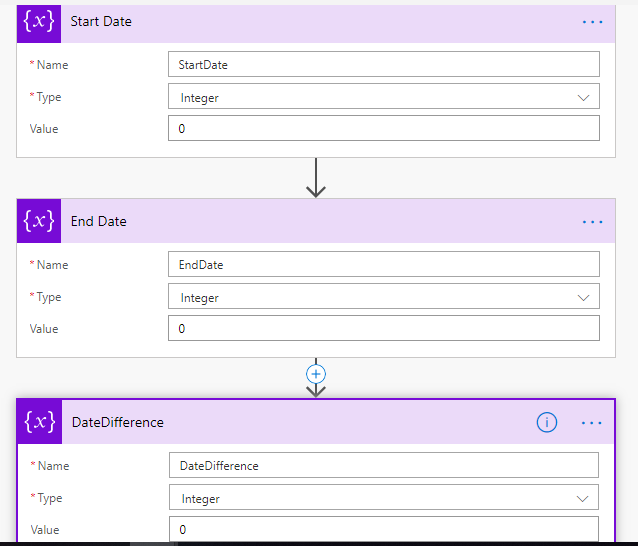 Then add the SharePoint GetList

Next add the loop 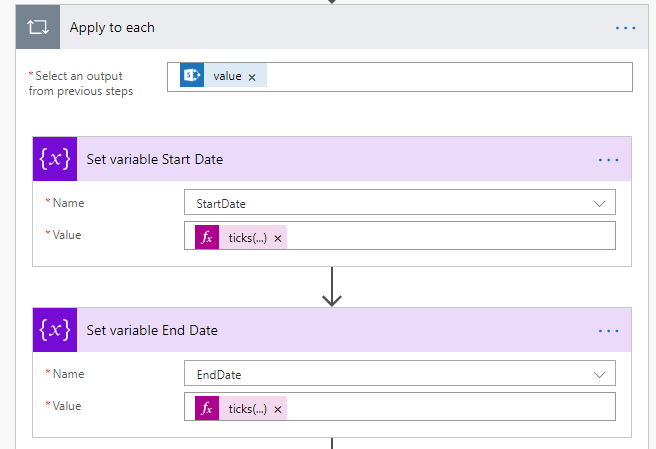 Here above the ticks expression is for the start date is as follows.

Here the function expression for calculating the difference of days is
div(sub(variables('EndDate'),variables('StartDate')),864000000000)
Try the above steps and let me know the results.

If this reply has answered your question or solved your issue, please mark this question as answered. Answered questions helps users in the future who may have the same issue or question quickly find a resolution via search. If you liked my response, please consider giving it a thumbs up.

Hi there!  So, I went a different route than @abm so you'll have your choice of solutions (great place to be

First, a bit about date math in Flow:  It's weird.  Like seriously weird.  But it's not just Flow, I guess a lot of computer date math works like this.  Check out this article on the specifics of how this all works, I think it's a good start for the beginner.

For the solution, I did take the same path in converting the two dates to "ticks".  I don't think there is any way around that yet.  But, instead of dividing everything by 864000000000, which is the number of ticks in a single day...I used 600000000, which converts everything to 'minutes' instead.  So, just like @abm , initialize an integer variable for each date, and for the value, try using  DIV(ticks(utcNow()),600000000)  (but replace the red part with each respective date/time).

So, now you've got two variables...  DateTime001 and DateTime002 (or whatever you call it) both DateTimes are actually numbers counting the number of minutes since New Year's Day, 1601 (no joke, I said it was weird).  Now, we initialize a third (integer) variable that will be the difference between the two...that expression will look like this:

This will give you the difference between the two in number of minutes...so now we just need to format it in the hh:mm format.  This is where it gets fun:

Credit to John Liu for this idea, but basically we are going to add minutes to midnight and have it return that time...which will look like hours and minutes (so, 130 minutes will look like 02:10).  That expression looks like this:

addMinutes(startOfDay(utcNow()), variables('varTimeDiff'), 'hh:mm')  - The red is the variable you created above.  You can see we are just adding a number of minutes to midnight ('start of day') and then formatting that in an hh:mm format.

Either way, keep us posted.

If this reply has answered your question or resolved your challenge, please consider marking it as a Solution. This helps other users find it more easily via search.

Have you considered creating a calculated column?

Please check this online doc and see if it helps:

Thank you for this write up @edgonzales . Really helped me out.