Hash in URL breaks my Flow

I have a Flow which creates a task in Planner whenever a new row is added to an SQL database. It's been working for over a year, but a month ago it broke because the 'Update task details' action has a 'resource link' which contains a URL that has a # in it.

I've tried replacing the # with %23, which works, but browsers won't replace the %23 with a hash in the resulting task attachment.

This is what used to work: 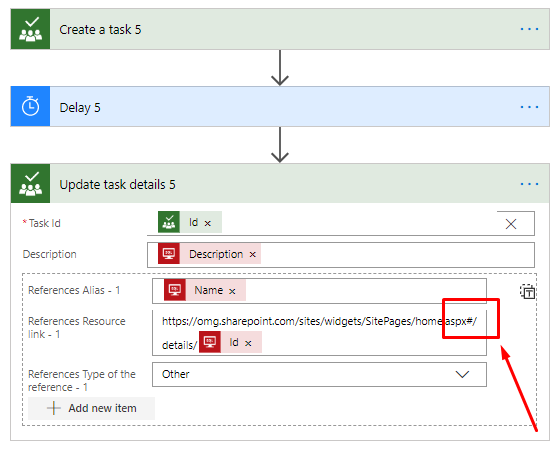 And the error I'm getting is as follows:

"message": "The request is invalid:\r\nEncountered a metadata reference property 'https://omg.sharepoint.com/sites/a-site/SitePages/home.aspx#/details/1436' in a scope other than an entry. In OData, a property name with a '#' character indicates a reference into the metadata and is only supported for describing operations bound to an entry."

Sorry, that didn't work, @Anonymous, the %23 in the URL was failing to change to a hash unfortunately.

encodeUriComponent('https://omg.sharepoint.com/sites/a-site/SitePages/home.aspx#/details/1436')
See output below.
https%3A%2F%2Fomg.sharepoint.com%2Fsites%2Fa-site%2FSitePages%2Fhome.aspx%23%2Fdetails%2F1436
Did I answer your question? Mark my post as a solution!

Advocate I
In response to abm

Thank you, @abm I had tried that and the DecodeURIComponent. This does convert the URL as an input:

"resourceLink": "https%3A%2F%2Fomg.sharepoint.com%2Fsites%2Fwidgets%2FSitePages%2Fhome.aspx%23%2Fdetails%2F1436"
However this is the error I get in the 'output':
"message": "Schema validation has failed. Validation for field 'References', on entity 'TaskDetails' has failed: The URI failed to parse. Invalid URI: The format of the URI could not be determined."
Message 3 of 6
1,050 Views
0 Kudos
Reply

Anonymous
Not applicable
In response to adampope

@adampope i'm pretty sure you've solved it by now but wouldn't this work?:

Sorry, that didn't work, @Anonymous, the %23 in the URL was failing to change to a hash unfortunately.

Anonymous
Not applicable
In response to adampope

Could you try using a expression?

concat('https://omg.sharepoint.com/sites/a-site/SitePages/home.aspx#/details/', ID)
If you hover over the ID you should see the body() code. Try and replace it into the concat equation.
Bit.ly is very useful for helping but I am curious if there's a code solution 😂
Message 6 of 6
889 Views
0 Kudos
Reply

'Ask Microsoft Anything' about AI Builder!

The AI Builder team invite you to ask questions and provide helpful answers at our next AMA.