The Power Automate Designer team would love to hear feedback from the perspective of novice Power Automate users, citizen developers and low coders on their experience with Power Automate Designer. When designing flows, what do they struggle most with? If this sounds like something you’ve heard someone mention, please forward them this pre-screening survey to complete: https://aka.ms/MPA_DesignerFeedback

@kishbuy238 and team are interested in hosting a screen-sharing session to identify opportunities to improve the experience. This survey will be open through to August.

Access to Version history on flows for when I mess up my flow and forget how to fix it! (I know there is solution level versioning, but that's not granular enough)

A container class (like Scope) that supports initializing variables, so I can collapse all my declarations at the beginning of my flow to "move them out of the way" so we can see the useful actions at a glance. Maybe this could even be accomplished by an "Initialize VariableS" action where we can stack them in a collapsed UI similar to conditions on a Condition control. Maybe even grouping by type in the same way that conditions can be grouped/nested inside of AND/OR branches.

A better way/more native way to call PowerShell than setting up runbooks as the increased permissions required to enable and configure them in Azure leaves it as an inaccessible method to citizen developers. If the user has permission to run the script, but no access to Azure then they can't make a flow to call that script programmatically.

I noticed when you copy/paste actions, that a GUID is stored in the clipboard. The ability to share Steps/Actions would be huge. I think about using OneDrive and sharing a file vs a folder when I think about sharing a step vs a whole flow. It'd be hugely collaborative to share a link to a single action with a peer, whether for collaboration or just to share as a template. I recognize this is a huge ask as the current permissions aren't structured this way.

A weird quirk that complicates my development is when I go to select dynamic content from an action which contains multiple copies of the same key at different levels of a JSON payload.

How do I identify which "result" I'm selecting? The only way I can usually do it is to ADD the dynamic content, then hold my mouse over it for the tooltip that reveals the whole object path. Can we add those tooltips to the dynamic content window so that I know which layer I'm in BEFORE I add it? 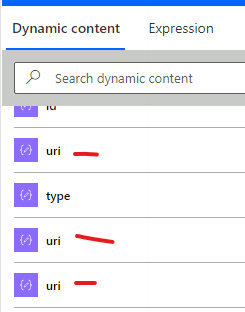 This one will probably be contentious:

The ability to still save a flow even if it's in an error state. I can't tell you how many times I've had to stay at my desk for an extra hour or two trying to get it to a working state so I can leave it and come back without worrying my progress will be wiped out by my browser timing out.

Warn me, wave a flag to suggest I don't do the dumb, leave a banner on screen to remind me I really shouldn't have, automatically disable my flow and harass me with email reminders to fix it, but straight up blocking me from saving my progress while troubleshooting is a major inconvenience.

Acknowledged the request. Thank you 🙂

Have a bit more of an 'equality' to the interface.

For example, only a few people know about trigger conditions, but even less will use them because it's just a text field.

Yet for those that know, you can pretty much construct a trigger condition using the Filter action's interface, then paste from the 'advanced' view of that.

Of course it's not as good as using the actual Condition action's interface, which would really allow one to build a properly good, deep, set of AND/OR conditions into a trigger condition. That said, I am aware that using multiple conditions is akin to one big AND set. Still, not everyone is, and it's still slightly painful for some to work out even placing a few expressions with commas in some brackets and an @ or before them.

I'm using Trigger Conditions as an example, here, but they're not the only offender here. Oh, and I'm not saying this as a soapbox thing ... I love Power Automate, nothing else touches it. I just think that applying some of the flourishes that exist for one thing, to those elsewhere would hugely benefit the interface.

Perhaps another example (I'm in the beta view) would be not having the more 'full' expression builder in the map field of a Select, but having it for the From ... and being pushed back into the old view. Equally ... I don't think a *lot* of users will like the "more 'full' expression builder" because they can't just tap on a function to pop it into the builder. I think there's got to be a way to have access to the Dynamic Values AND the tap to include functions below that builder ... maybe some tabs? I dunno.

Solution Sage
In response to ryleybauer

Or at least be able to save it in draft mode, so if you are making edits to a workflow that is being used, the current published workflow continues to work until you publish the one in draft. Nintex has this feature for their workflow designer, so I don't see why Microsoft cannot do this with Power Automate.

So glad you've posted this. I've filled out the form, hope to hear from your team for a catch-up.

I may have missed something, but doesn't this also depend on well managed 'required' fields?

2_Have an option to force a connection to refresh so that users won't have to delete/recreate a connection just so that it picks up whatever changes were made to a Form, DB table, etc...

4_Enlarge the Dynamic content/Expression dialog that pops up after clicking in an input text field, and when clicking in Expression, pop-up a bona fide code editor that can be resized to the whole screen if need be. As it stands today, I gotta shuttle back and forth between the designer and my fav editor.

5_Fix the Javascript slowdown of the UI after leaving the designer open for more than 5 days in Chrome.

2_Have an option to force a connection to refresh so that users won't have to delete/recreate a connection just so that it picks up whatever changes were made to a Form, DB table, etc...

4_Enlarge the Dynamic content/Expression dialog that pops up after clicking in an input text field, and when clicking in Expression, pop-up a bona fide code editor that can be resized to the whole screen if need be. As it stands today, I gotta shuttle back and forth between the designer and my fav editor.

5_Fix the Javascript slowdown of the UI after leaving the designer open for more than 5 days in Chrome.

You would basically be destroying HUGE swathes of usability of the system, forcing users into needlessly complex routines using Azure apps, which just need a simple HTTP call.

I've created an "Idea" to bring this to the fore, here:

If they aren't aware of it's usability, then I suggest they perform just any simple (non-groups 😉) Graph call in V1, and then try it in V2.

Here's some pictoral evidence of the change:

Do not do this to us, Anna, what's the point of an automation service that can't automate?

Please let us organise our flows into folder and tag them.  At the moment it's a nightmare seeing which flow does what in a big list

Knowing what the Flow needs in a given field - is it the ID, the Identifier, etc. It would help if the naming convention was a little better

Understanding the difference between 'Equal To' and 'Contains', particularly when leveraging dynamic variables. There was a brilliant resolved post on this issue I can no longer access, which drives me wild.

Hi, @AnnaChu, something that I noticed the other day is that the forum has removed the "I've found a bug" section, plus there's nowhere to adequately ask for help with/for/about the forum itself. These feel like more things (in addition to the Graph API action) being taken away that reduce our ability to easily design flows, because they affect the very ability to report problems with that, and/or the only real interaction the community has on building flows.

Could we be appraised of what we should use in place of these functions? As it appears that this is the only thread relevant to either. 😅

I have complete the form on the initial post. I thought that I would add my comments in here too.

@ryleybauer mentioned about the ability to save in an error state, which I love and the ability to have a version history, my idea to make the UI easier to use is along similar lines.

Often I find myself half building flows just so that I can get data from the first part (HTTP requests being top of my list) just to re-edit the 2nd part of the flow (Parse JSON). It would be really useful to be able to make steps inactive or greyed out so that the flow could be build/saved without the required information being added.

It would also help when encountering issues with a flow when attempting "something different" that doesn't quite work as well as the initial design. This means that you have to delete and re-build when you could just make steps active and inactive accordingly.

Would this resolve some of your issues too @ryleybauer?

Resolver II
In response to Redders

That would be awesome!

I have found that several of the Template submitted to the Flow Community, or published directly by Microsoft, are not available in the GCC environments.  I end up having to go into my Developer account to find a template and then recreate them manually, which takes additional time.  Two in particular I can point to are the Templates for Forms and OneNote.  Neither of which are available.

Did you know that it was this hard to work with OneNote Notebooks in Flow (especially Shared Notebooks in Teams) - Power Automate solution: OneNote action errors involving invalid or inaccessible Notebook Keys and s... I would never have gotten my flow to work without this resource, and even then, I still cannot set or update the page title.

I had to create a delay, such as discussed here (Solved: Re: Get updated OneNote title and link - Power Platform Community (microsoft.com)) because the flow was sending instantaneously after a page was created without capturing the page title.

Advocate II
In response to ryleybauer

Access to Version history on flows for when I mess up my flow and forget how to fix it! (I know there is solution level versioning, but that's not granular enough)

^^^ THIS.  Not just for development improvement, but also for organizational retention or if the Flow is built in Teams, not a solution.