How do I get a teams ID and teams channel ID dynamically from a sharepoint list and set a variable with it?

I have multiple teams sharing one SP list which is filtered per team and mapped into the respective teams as a list tab in the general channel where the users of that team can see only the items created by that team.

I'm trying to build a teams notification flow where there have been no records created in a sharepoint list in the last seven days.

If there have been no items created in the SP list in the last 7 days, a notification must be sent out to the respective team and channel dynamically to inform that team that they must create items in the list.

I've used one sharepoint list and tagged each item with the name of the team it belongs to (Team column). The list has been mapped to the respective teams general channel as a list tab but filtered to show only the items for that team. Team A see's the list showing only items for Team A, Team B is the same and so on.

I have a 'helper list' where the title is the team name (same as the main SP list team column) and have the team ID and channel ID listed in the next two columns.

In the flow I've initialized separate variables for the team ID and channel ID which I will later set the values for and reference in the teams flow bot fields that requires the teams and channel IDs.

Firstly, how will I get the dynamic team and channel ID from that 'helper list' for each team that has not had any items created in the last seven days so the notification can be sent to those teams?

Secondly, how do I map the dynamic teams and channel ids to the 'set variable' actions?

Thirdly, do I need to put the above actions inside of an apply to each loop so it send notifications to each team that hasn't had any items in the last 7 days?

I'm lost in terms of how to approach this. If there is a simpler way by designing it differently I'm all ears. 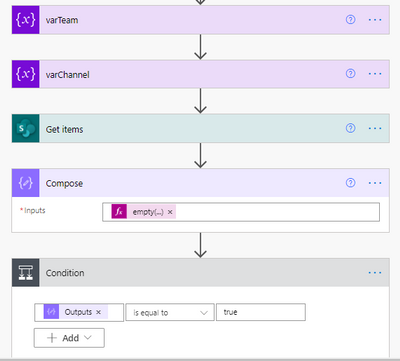 One alternate approach might be to start with an array with your Team names (SharePoint column values) and the notification distribution list for each.  You could then get SharePoint list items filtered on created date in last 7 days.  You could then iterate through the array and count the # of items present for each team (filter the get items array for the team in the current iteration).  Inside that Apply To Each, you would trigger a notification email to the dist list for that row if the count of filtered items not >=1 (or is empty).

Did I answer your question? Mark my post as a solution! Kudos are also appreciated!

Thank you for taking the time to help me. I appreciate it. I will give it a try.