I have created an automated flow that's triggered when a new response is received for a Microsoft Form.
It adds a new row to an existing Excel sheet that's stored in Onedrive.

However, before I add the row to the table, I would like to add an incremental ID based on the last RFP ID that exists in the spreadsheet .

This cannot be entered manually using Forms/Excel because

a) Access to the Excel sheet is limited to 2 users 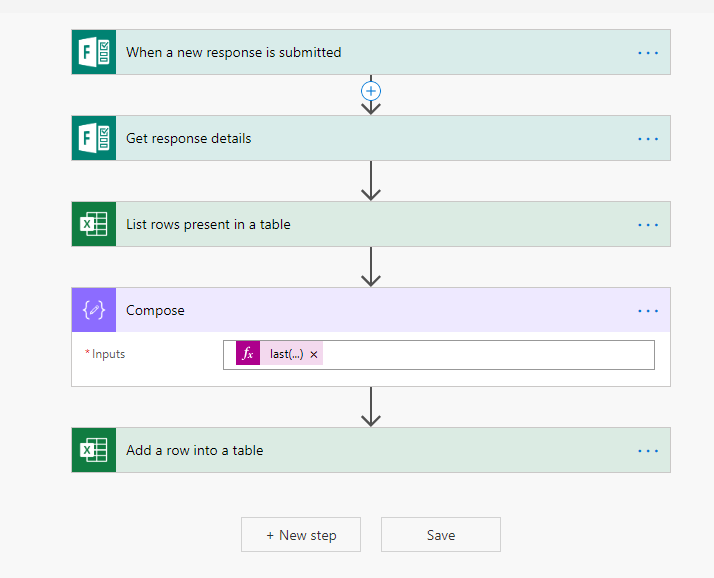 So far, I'm able to get the last row and get its output in Compose but unable to extract RFP ID and increment it to be added in the newly created record. I also note that RFP_ID will probably be required to be trimmed/converted to another format to be allowed to be incremented?

The expression used in Compose is last(body('List_rows_present_in_a_table')?['value'])

Any help will be greatly appreciated!

If you liked this reply, please give it a thumbs up! If this reply has answered your question or resolved your challenge, please consider marking it as a Solution. This helps other users find it more easily via search.

If you liked this reply, please give it a thumbs up! If this reply has answered your question or resolved your challenge, please consider marking it as a Solution. This helps other users find it more easily via search.

Anonymous
Not applicable
In response to edgonzales

It'll be definitely interesting to know the alternative that you suggested i.e. by using less functions
(if you have the time, of course) 😀😋

edgonzales
MVP
In response to Anonymous

Of course!  It really only saves the last part, and also means setting up a variable.

Then you could add the action step "Increment Variable" to add 1.

Not super helpful, but is a little bit closer to the 'no-code' stuff.

Anonymous
Not applicable
In response to edgonzales

Thanks for helping out @edgonzales , greatly appreciated!

Did you know that you could restore a deleted flow? Check out this helpful article.