I have created many forms that have a supporting Power Automate approval workflow. I know how to Get User Profile, Get Manager, etc. and have the form flow through the organisational structure.

1. I have forms that require multiple levels of Manager approval through to the General Manager. If I have a Approval Automation that requires three levels of approval and goes to a Manager to approve, then an Executive Manager, then the General Manager, how do I manage a flow that starts higher up the organisational chart? The automation wants to send to the next Manager, but the approval may have started higher up the Org chart and will send the approval multiple times to the GM.

Manager Submits Form - Goes to their Manager (Exec Mgr), Goes to GM and then Goes to GM again.  This Manager is 2 steps from the GM, but the automation has 3 Start an Approval steps.

That is correct. How do I complete the approval process if complete in two stages?

2nd Start Approval with Email of Get Manager 1

3rd Start Approval with Email of Get Manager 2

Thank you for your assistance.

Can you show me any screen shots or show me how to do as you suggest? I have searched and cannot find how this condition would be set.

Sorry for the late reply. My suggestion is just one example, but why don't you add a conditional expression as follows to compare the previous approver with the one you got by getting a supervisor, and if they are different email addresses, perform the next approval. 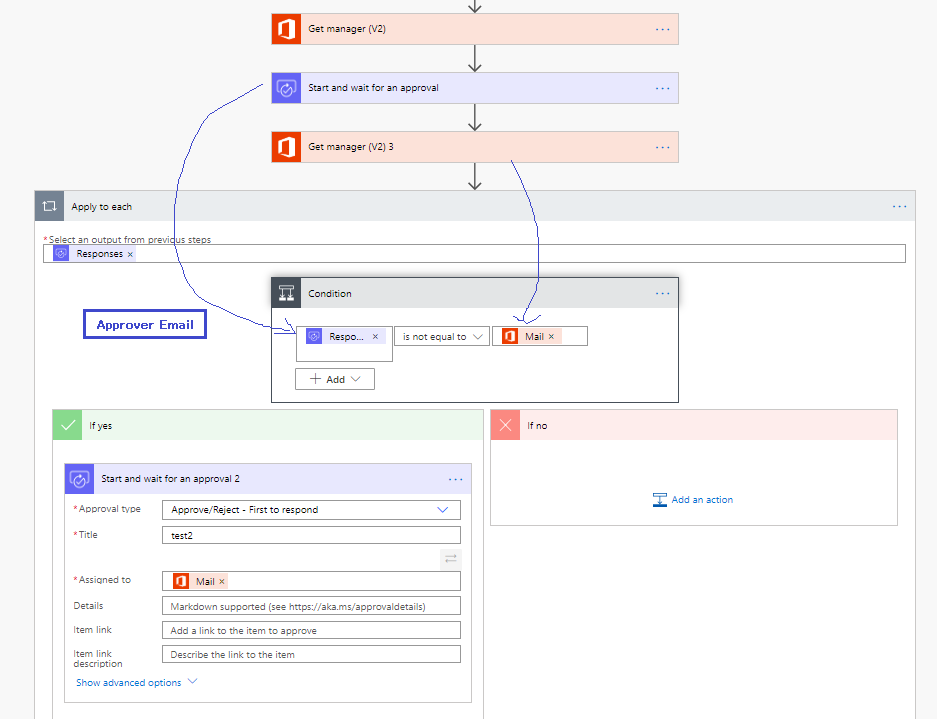