I am trying to setup exponential interval retry policy for insert function into google sheets but cannot find good explanation on how it works. I set count to maximum possible 90 and it is clear to me that it will try 90 times. Confusion comes from "Interval", "Minimum Interval", and "Maximum Interval" options. Since I am on Flow 2 plan meaning that my flows run once per minute, I will enter "PT1M" into "Interval" Field. Then I will enter "PT1H" into "Maximum Interval" field. To me, that means that first retry will happen in 1 minutes, and intervals of all subsequent retries will keep increasing exponentially until they hit 1 hour. Then, retries will happen once per hour until all 90 retries are done. Let me know if my logic correct, because I cannot find explanation anywhere. 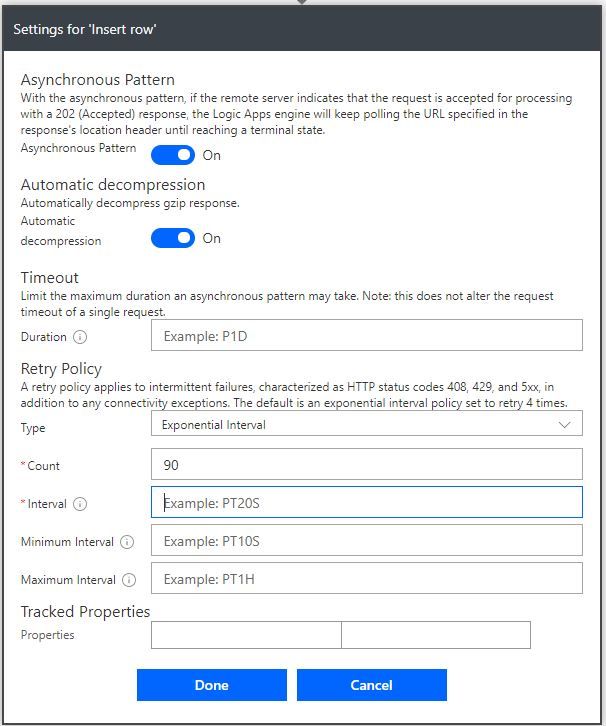 The default retry attempts is 4 times. However, we could configure the retry policy depends on our scenario.

Kudo Collector
In response to v-yamao-msft

@abeguliev, setting a minimum will not cause the deltas to exponentially decrease. The min/max are just boundaries to the retry delta, which is determined primarily from the required "interval" field and the retry number. If you omit a max but provide a min, then the max interval range will just be determined by the algorithm's normal behavior.

I found this post while searching for the same explanation about the peculiar exponential retry options (still with no clear documentation linked from Flow). The only reply was ambiguous on the behvior of the minimum interval, so I did my own research and testing. Since this is the top hit on Google for "microsoft flow exponential retry" and I expect others will find their way here looking for answers, I'll post my findings.

First off, it looks like the feature was added in response this request in Logic Apps. Here's the Azure Logic Apps explanation of the implemented feature. It explains the exponential retry policy as "a random interval selected from an exponentially growing range before sending the next request."

Since Flow is executed on Logic Apps, I believe the documentaiton for Logic Apps applies to Flow. Here's a screenshot showing how the Flow Action retry settings map to the Logic Apps documentation:

To verify this, I did some testing in Flow.

I made a simple Flow which returns 429 status. 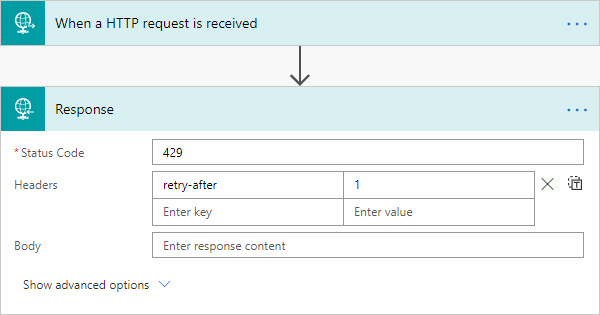 Then triggered it with varying retry settings and retry-after headers.

Here are the results:

When request fails or times out with error code 429, 408 and 5xx response, then in case of exponential interval, it increases the waiting time between retries after each retry failure and this can be achieved by specifying maximum and minimum interval waiting time. For example: When request fails the first time, it retries after 2 seconds. If it fails again then it waits for 4 seconds before next retry. If it again fails then it waits for another 8 seconds before sending the next request and so on. After each failure it incrementally increases the wait time between the successive retry requests and it keeps retrying and keeps increasing the delay time till the maximum retry count is hit. Therefore it helps the service to reduce the load by giving some rest period for processing all the requests. If the request is failing even after maximum retries, then you will get time out or service unavailable error from the service you are calling.

You can refer to this blog :

Hope this is helpful!

Funny how despite all the technical jargon they used, the last reply, above mine, was the easiest for me to understand. First explain it in single language.. 👍 Thanks @PoojaBhardwaj