I'm just playing around with reminders and approval steps. Now I want to make, that a reminder should be sent if a approval step is not approved or rejected after 2 days.

I'm using atm the "Do Until" function with a delay in a pararell branch the reminder sending function works. But not as expected. If the Approval step is approved or rejected, it never ends. I think the choosed value from "Do Until" is wring.

Acctualy I want to build my flow like this video here but i want the delay in a "Do Until" in order that the reminder will be sent always after 2 day if there is no action from the approver. https://www.youtube.com/watch?v=whJoANRW0AI

How can I build that easy? 🙂

use do until and variable technique

Hi @Mahoney , the post by @ScottShearer is awesome, and that can be enhanced to do what you want with a couple of small changes. I'll be creating a video about this enhancement shortly.

At the top of my Flow I am going to initialize a variable which I have called "Break" which is set to 0. I will use this to ensure that my reminder emails aren't triggered if they aren't needed.

I will then branch my steps exactly like you have by using a parallel branch to separate my approval logic and my reminders.

In the condition which responds to the approval response, I have used a "Set Variable" action to change the "Break" variable to 1 to tell me reminders that they no longer need to fire.

In the reminders branch, I have got a do until, where it will loop until Break is equal to 1. Within that loop I have a delay (of 1 minute for my testing), a condition to check the value of Break to ensure that it doesn't send an email after the approval has been completed, and a send email notification action. 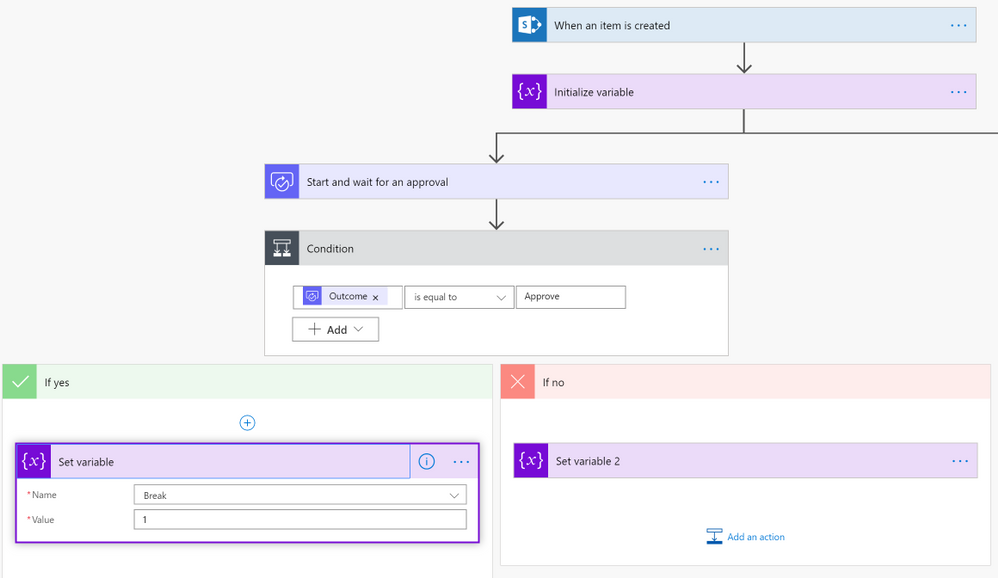 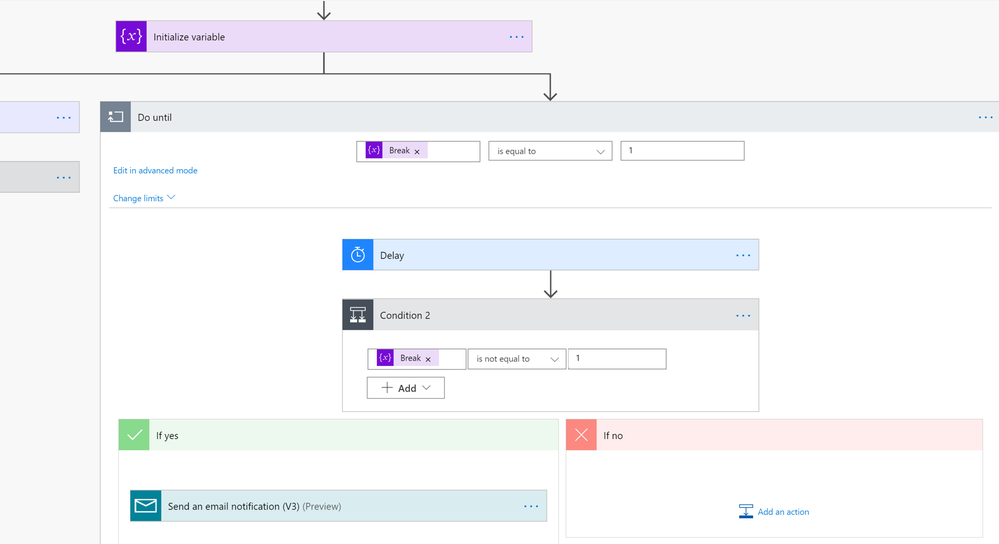 Thnaks for your feedback. I understand what you mean and I just made a test with my flow.

The variable (string) is set to 0 at start and after approval or reject set to 1. So that works correctly. The Problem is, that the until do function keeps running and running and sending reminder mails. I build the flow exactly like your picture.

Is there a error in my flow or what? 🙂

Hi @Mahoney, does it send multiple reminder emails or just one?

Can you post an up to date screenshot of your Flow please? I'll see if I can then spot why it's not quite behaving as you want.

Sure, here is my current flow.

Hi @Mahoney I've spent ages looking at your Flow and at the moment I can't see what the difference is between yours and mine.

When you run your Flow, are you still getting emails every 20 seconds after it has been approved or are you just seeing it once?

Thanks for your answer.

Yes right, if I run the flow i will getting reminder mails every 20 seconds after a flow is approved or rejected. :((

HI @Mahoney I've reduced my recurrence time to 20 seconds to match yours, but I'm still not seeing the behaviour you've described. I've exported my Flow for you to try and import to see if you get a different behaviour when running it.