Hi All,
Has anyone faced an issue with sharing Office Scripts to be used in flows for other users?
There is an issue, for users who have access to the flows, files and scripts can not execute the script in flows.
Error: Script not found. It may been unshared or deleted

Can you double check if the specific scripts are enabled for sharing?

Yes, I have seen some others facing this issue last week.
All file access given, flows and scripts shared, still receiving an error.

I am able to reproduce it, so it feels like we are missing something. Or it is a bug 😁

Do the other people see the script listed under the This Workbook section of the Office scripts?

And what happens when they run it manually. Do the get the Run Permission question and does that work? 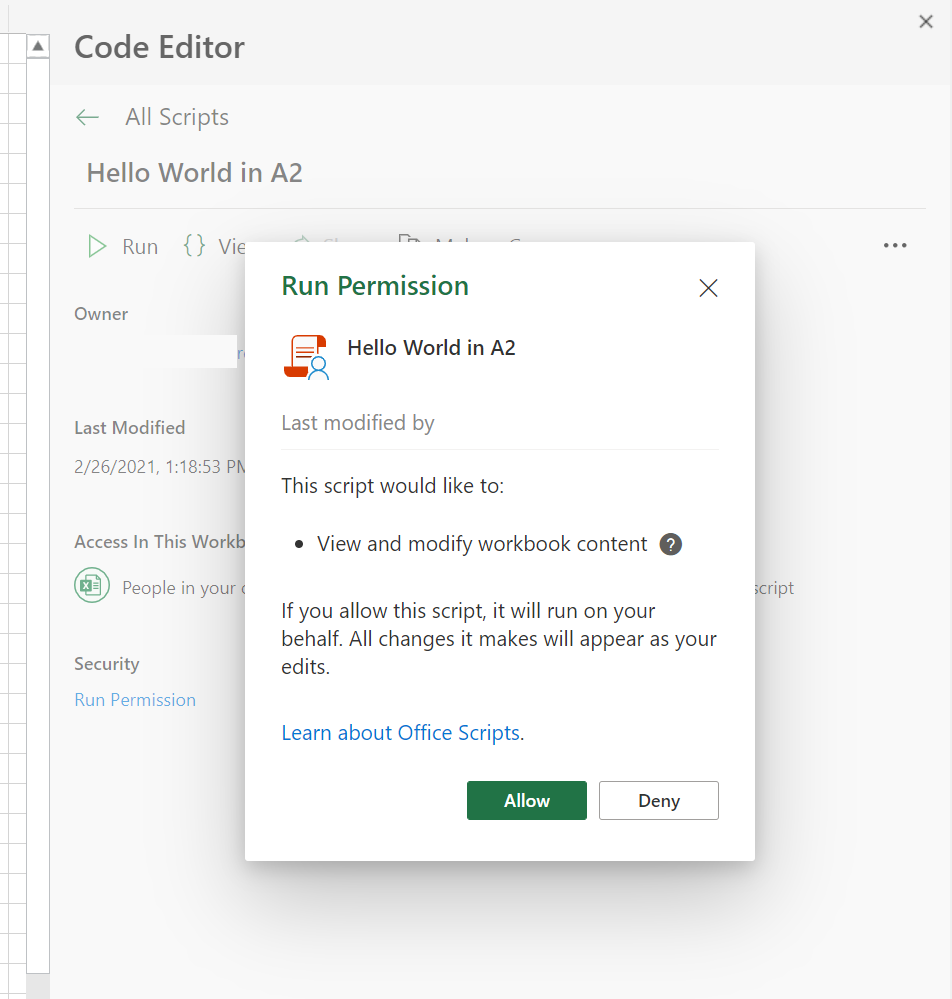 Also the sharing on the Office Script looks ok. It is still hosted in the OneDrive of the original owner.

Yes, I can see that script has been shared with the user, even I have checked on his account, It can be seen after sharing the script.
When it comes to running the flow that I have created and shared with the user. The script is not executing, basically giving an error as not found, not shared or deleted.

Yes, I have tried to run manually, It asks for permission, and I'm allowing it. But not running the script. When I click the run permission again, it keeps asking me to allow or deny but no executing the script.
The script runs normally by me but not for a user.

I will try to create all scripts again then share them.
Regards,
Serbay

Thanks a lot for your answers by the way!
Regards,
Serbay

I just noticed a new response in that other thread. Over there it is suggested to change the setting for connections used. I have changed that an it was working for me now.

Hi,
Thank you so much for your response! But, unfortunately, this option is not available for flows that have a Power apps trigger.
Do you have any other ideas on how to call such a flow only on the behalf of the owner?

FYI, I've updated my answer to the linked post with a solution that works for me for the PowerApps trigger: https://powerusers.microsoft.com/t5/Building-Flows/Office-Script-Error-quot-Script-not-found-It-may-...