I am in the middle of building a workflow that should import the data of a CSV file into a SharePoint list.

First step for me is to follow this article by sergeluca https://sergeluca.wordpress.com/2018/10/28/microsoft-flow-advanced-tutorial-creating-a-csv-converter... to get a basic understanding of how to work with this scenario.

I already know that there are slight differences between Microsoft Azure Logic App and Microsoft Power Automate, but I can't get my head round the following behavior.

I have rebuilt the flow presented by the article owner in both Power Automate and in Logic App.

In the first action I initialize an Object variable. So far so good for both workflows (Power Automate and Logic App).

In the second action I use Compose to compose the CSV data. So far still good for both workflows.

In the third action, a split is performed.

there is currently an issue in the flow editor when we use the linefeed character, so we have to explicitly type the logic app code. Add a Compose action, name it Table and add the following code in the input (not in the expression, and keep the double quotes):

When I do as the article owner says, it works in Power Automate. Logic App however couldn't care less: 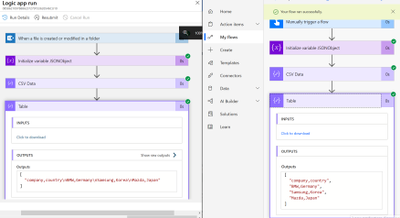 I try to use split in Logic App to do the same thing. You'll notice the result in the screenshot above. Seems that it does not recognize the \n in the CSV Data string.

Am I completely missing something obvious? Or am I struggling with Azure Logic App limitations which will never work?
I did take a look at this article: https://docs.microsoft.com/en-us/azure/logic-apps/workflow-definition-language-functions-reference#s... and for me it looks like it should be possible from within Logic Apps right?

Thanks a lot for your help! 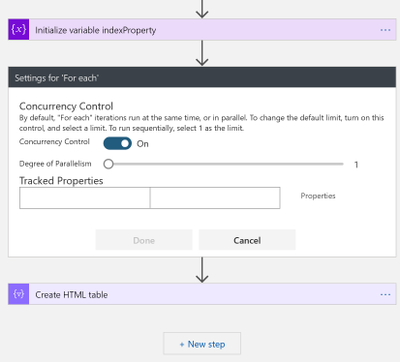 Looks like I found a solution to the first issue already, provided by Sujith on this Forum:

It appears that Logic App handles it differently.

After going into Code View, I noticed two times the \ character at the inputs row. I removed one and now it properly formats the data. 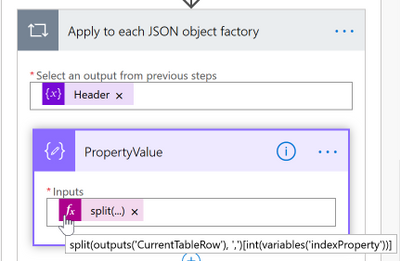 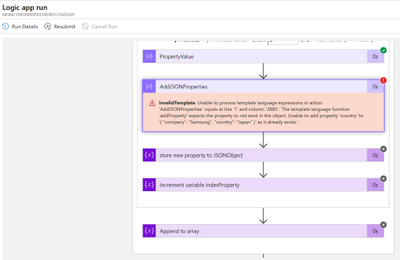 It is mixing up the data incorrectly as you may see in the error message.
Would there be another trick in the code view to resolve here?
Hope this story makes sense.
Many thanks!
Message 2 of 5
1,325 Views
0 Kudos
Reply

The same function, but may need to do different processing in different environments. Please consider submitting your question in this forum for a more detailed answer:

Thank you @v-bacao-msft I have posted the question there as well.