I'm a complete noob to MSPA. I've found a few flows here in this community that track emails in Excel, but they all seem to require a specific format (i.e. specific columns) for the Excel table and don't do exactly what i'm looking for.

I have an existing Excel table with my business contacts (like a mini-CRM). What I'd love for MSPA to do is to check all incoming Outlook emails against a column in my existing Excel file (or potentially several different sheets in the same Excel file). If the email address is already contained in the list / column, then put today's date in another column (overwrite the date that's already in there). If the email address is not containd, do nothing.

What this is supposed to do is to update my table of "when did which contract write me last".

Thanks a ton for any suggesstion,

hi @conAK  I reply want you need and this is the solution. 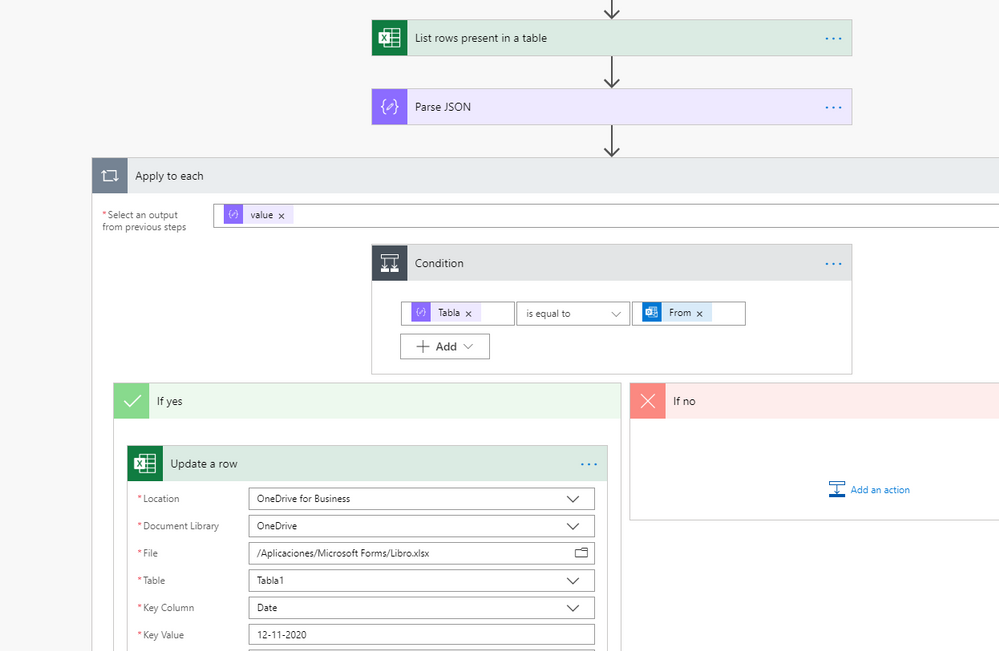 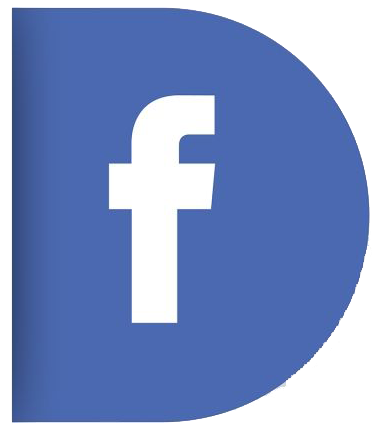 I recently discovered that you can query Exchange like any other data source and pull email info into excel that way. I use it to track requests that go into a folder based on the sender. I think that this, paired with a pivot chart might work for you.

Please take a try with @ChristianAbata 's suggestion and let me know if the issue could be solved.

thanks a ton, I just can't get it to work and have a ton of questions...

- Does your screenshot show the full flow? Shouldn't it start with "receive an email"?

- I don't know anything about Json and parsing. Plus I have not found that option in my MSPA menu - where can I find it. And when I just put a condition after "receive an email", I don't get the option of comparing the sender to a value in an Excel sheet. I only get options that relate to the email itself, as I understand it.

Seems like I'm lacking some deeper understanding here - is there anything I should read before to better understand your suggestion?

hi @conAK  my screanshot just show how you cloud get the values in your excel table and then compare it with the email that was received.

So the flow starts with. When a new email arrives, thats where I get the parameter From.

Then to use Json just you need to add an acction then write Json in search so to use it the first part is pass the Array list an the a schema, that schema is the output of get rows. 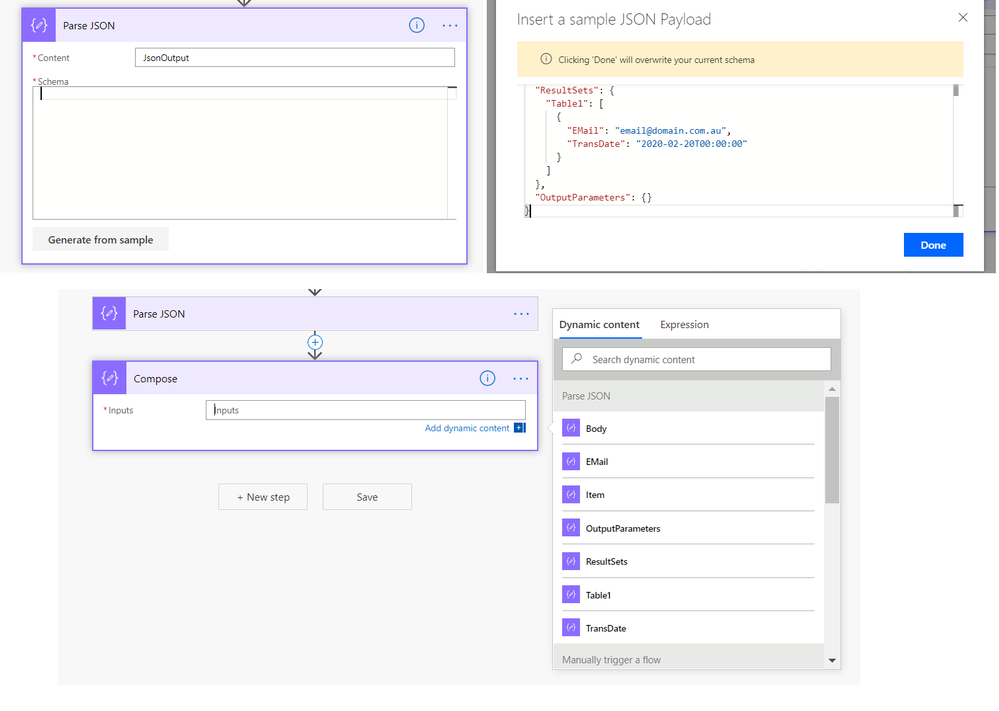 thanks a lot for all your explanations, but this seems way above my head. If there isn't an easier solution, I guess I'll just stick to doing it manually. It would take a lot of back and forth to truly understand this and get it set up and I wouldn't wanna take up too much of your doing.

Advocate II
In response to conAK

Don't get discouraged. Stuff like JSON and parsing and some of the expressions were fairly intimidating but with a bit of practice you can wrap your head around it. I studied English and Theater and while I wouldn't call myself an expert at all, in a few months I know it well enough to do some interesting things in Power Automate.

JSON is Java Script Object Notation - its just a way of communicating information.

Let's say I had a table called Party in an Excel file, it would look something like this.

JSON would be one way you could transmit this application from one to another. The table would look something like this.

So, it looks fairly complex so lets break it down. This is a JSON array - basically tabular data expressed in JSON. An array is closed off by square brackets - [] and is made up of objects which are closed in curly brackets {}. Each objects have different properties. Going back to the table - the array is the whole table. An object is a single row on the table, and a property is a column on the table.

Arrays can be nested in each other as well. As you can see, a character can have more than one class, so instead of just storing it as "Class 1" and "Class 2" it made more sense to create a small array in the larger one. This way I don't need to change the schema when a character add's a third or fourth class.

Now, a schema is like a map. Its a set of instructions so that the program (or flow) you are working on will know what data to expect. The schema for the data above would look like this.

This tells flow that I am going to send it an array. The array will have multiple objects with 3 properties. Two of them are strings, one of them is an array of strings.

What the Parse JSON action does is allow you to take a block of JSON information and use it in later sections. This allows you to take the information from the "List Rows" and access that data as properties down the road. You would be able to down the road on your flow, select a property and perform an action on it.

A lot of information and I hope its helpful! Don't get discouraged - if you don't have a background in this sort of thing it can be kind of hard to get started but when it works it feels like magic.