Hi all. I'm trying to automate some tasks with Tableau. Basically the flow is:

I got pretty much everything worked out and working but I really don't like how I get the token out. Currently I'm using a convoluted mix of Search() and Substring() to extract it. I would love to use XPATH as its a lot easier to implement and I'm always game to learn new things.

Here is the XML data that is returned by the logon request:

From this I would like to extract the following string "THIS IS TOKEN" using XPATH. I used this tool to test the XPATH expression and this seems to work "string(/tsResponse/credentials/@token)"

The issue is running it into flow. Initially I was using the HTTP request action but I didn't want to make too many requests so I created a mockup where I paste a sample payload into a Compose action and have a second compose action that executes the XPATH.

Here is the result of the flow. 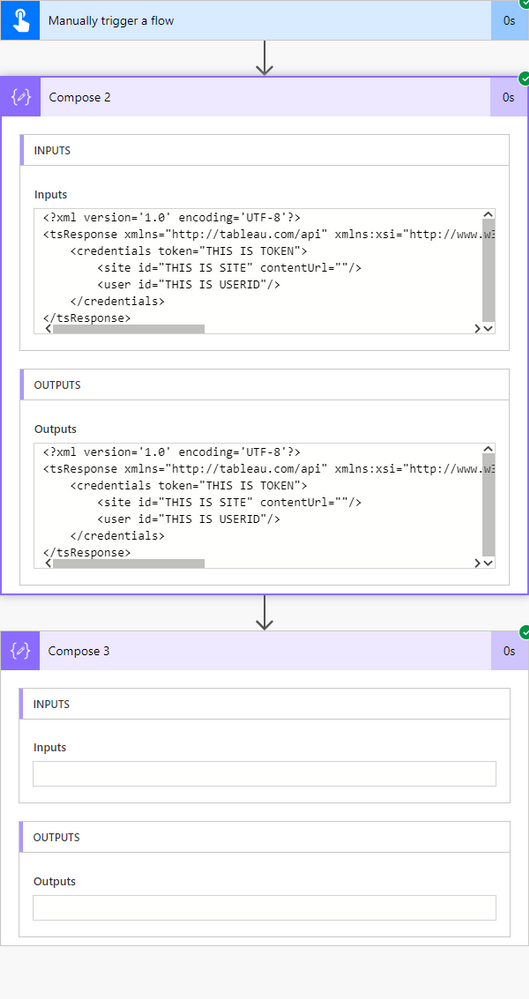 I've tired a few other XPATH examples from online and they seem to work but I just can't get this to function correctly. Any idea what I am doing wrong?

Please try to refer to the following method to configure Flow:

In addition, you can follow the link and get more details about the XPath() function:

Advocate II
In response to abm

@abm Thank you, this worked.

I had to modify it slightly to xpath(xml(outputs('Compose_2')),'string(//*[local-name()="credentials"]/@token)') to get the correct output.

So, that being said, what did I do wrong?

XPath queries are not the straight forward ones. Glad to hear that it is working.