split string and apply for each

Ok, I've read a few articles and submissions on this form and elsewhere in Azure logic apps, but I'm not getting it.

Very simply, I want to pass Flow a string with elements separated by a semicolon and then run a foreach on each of the items from the split.

As I've said, there are a couple of articles, but I just can't wrap my head around them.  People have said "oh yes, the JSON needs to be encapsulated in double quotes" - but where or what or how, I can't seem to fathom.

There are a couple of holes in my knowledge;

The format of the thing I'm passing to Flow from PowerApps - can it just be a variable or must it include quotes or what?

but I clearly have no clue what I'm doing and nothing changes the outcome.
So I also can't figure out what the flow syntax is...

The compose piece works, but if I try plug the output into a foreach I get told it's a string and not an array...so I can theorise that I need to apply some sort of JSON conversion on the string or something, but I've no clue how.

Whether I'm on the right track or not, I'm tired of trying - can someone please give me a working example from scratch of sending a simple variable from powerapps, splitting it, and then doing a foreach on each of the split items?

Try the following under Microsoft Flow: 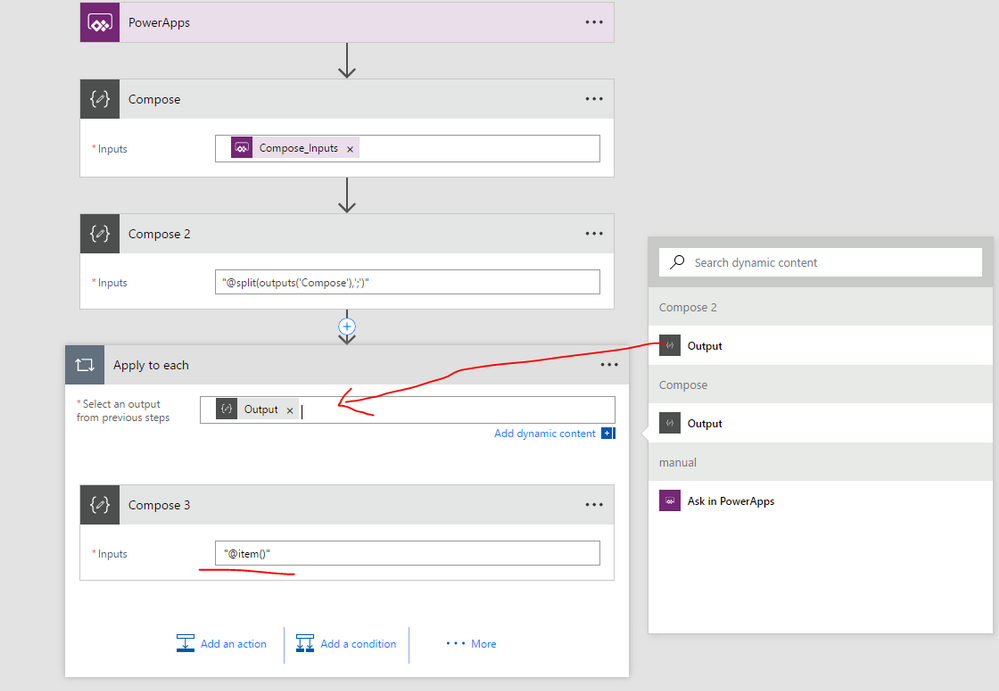 The format within PowerApps should be string, we could take use of the TextInput.Text, or just the string with double quotes: 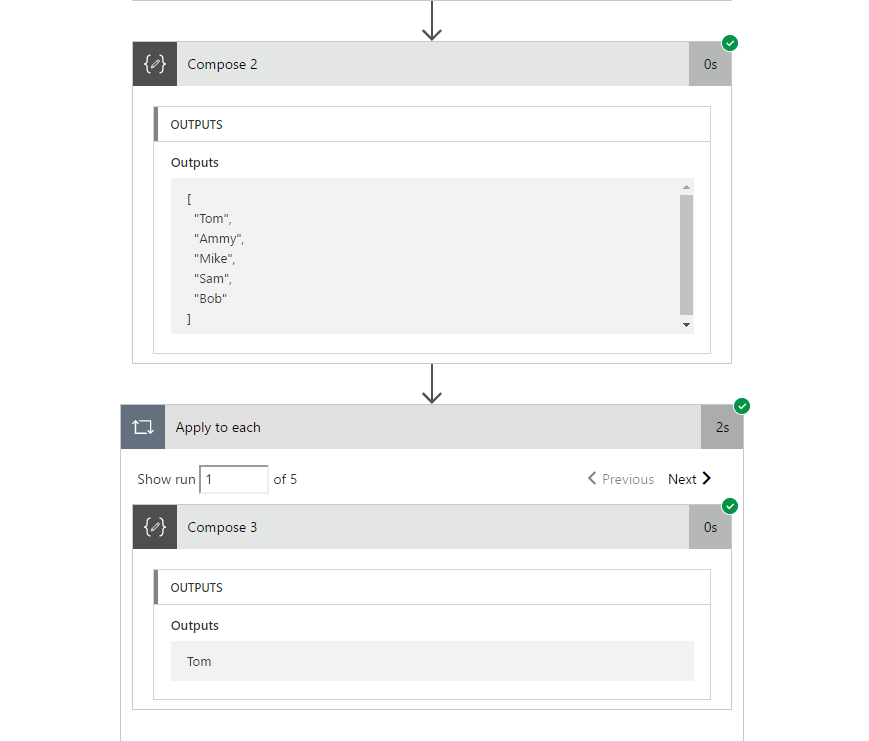 Try the following under Microsoft Flow:

The format within PowerApps should be string, we could take use of the TextInput.Text, or just the string with double quotes:

Would this work for an input with multiple rows of comma separated values? I'm trying to figure out how to turn csv into json (array)?

Advocate II
In response to jlazerus

Hi there, did you end up finding the answer to your question? I am looking to turn comma separated values into an array in flow as well but haven't been able to find much documentation on it.

Advocate III
In response to amandalee

I'm having the same problem. Something so simple should be documented CLEARLY in the Flow documentation.

How to turn into a FLOW ARRAY?

Advocate III
In response to kbirstein1

Or in my case this string:

I'm chipping away at the same issue. Essentially, I want to load a csv file into a SPO list.

and multiple values for each field listed beneath.

I've managed to use the split() function to break this by carriage return, put it in an array variable and I can have my Flow iterate over the 49 records. However, I can't use any of the field values within each line. It looks like what I've got so far is an array of arrays.

Can I convert to json so that I can use each field from each record to map to SPO list items?

Can I use the csv table action?

Should I just be carving up the text file differently to start with?

Were you able to resolve the issue? I am facing the same problem and wa sthinking if you have a solution now.

I did find a solution to my problem of converting CSV to json. However it involved creating an Azure Function.