500 item limit in CDM entity search filter(need to switch to asp.net app if this exists for long)

500 item limit in CDM entity search filter, this makes it very dofficult to use for any business scenario(export, data analysis)

Currently its only exporting 500 first items which does not meet any business criteria(imagine you are doing google search and it returns only 3 items), sadly if this is permanant issue like sp list 5k limit I will have to inform this to our sponsors of the project and most likely as it does not meet business need to filter and export we will have to do asp.net app which we did not want to do.

I will atleast need some good workaround. One thing I observed is there is export data link in CDM screen(can you give me some workaround based on that?)

I have a temporary solution until delegation works. It is impractical and can introduce flaws in writing data. It is also inefficient in some parts, yet has benefits in others. But if you need those records, this works.

I use @hpkeong's model of a timer. The timer imports 500 records at a time (the limit in PowerApps). To achieve this, every entity must have a field identifying "which 500" each record belongs to (e.g. 766 belongs to the second block of 500 records). I just call my field n" and set it to "number."

Create a button that activates a timer which will import the next 500 records each time it ends/repeats.

Then set the Timer's properties:

How does this work?

The variable "maxn" is determined ahead of time--it looks for the a value that describes how many sets of 500 you have. So if you have 10,000 records, and you correctly programmed the way your n field is written, then you would expect maxn to be 20. Unfortunately you can't simply use Max(datasource,n) since delegation is not supported.

Click Button1 to begin importing. The "import" variable will activate the timer properties. As long as import is true, it will check for the number of iterations of importing by n that you have done so far. Since it starts at 0, 0 is less than maxn, the expected number of groups of 500 that you want to import. So the timer will import the nth group of 500. This repeats until iter equals maxn, then it deactivates the timer.

Flaw 1: if the last record in the datasource is blank for n, then nothing will load. This can easily happen if you are in the middle of writing and the app times out your session.

I previously had the Timer compare to see if the next n existed, but that was very slow--foolproof but slow:

Flaw 2: The problem with the method above is that there was a version of PowerApps in which Filtering the datasource by "n=iter+1" had service limitations. iter+1 was too complicated for the formula, so I had to map it to Timer1.Text:

You need to do the writing in 3 steps:

This gets more complicated if you want to update an existing record--or to check that one exists. Either way, the n value of which set of 500 it belongs to can only be calculated once the column of unique values has been figured out, since it is based on that value. This explains why you need to Patch twice.

I originally collected the temprecord as it was written, but I came across some writing errors. I've listed it below for reference, but YMMV:

Flaw 3: Writing needs to access the datasource twice. This could be instant sometimes, but it can also be very slow.

Flaw 4: as mentioned before, if the app closes in the middle of writing, then the n value might not be written. This could break your importing unless you use the slower importing method (see Flaw 1 and 2 of Importing)

You could arguably calculate all the n later using UpdateIf or ForAll, but then you would need to figure out a new way of importing when n has not yet been calculated.

This method is only as good as you can keep data current. If you have multiple users accessing the same data, or even just multiple instances in the webplayer, I do not yet have a solution on syncing data in a reasonable way. In my heaviest entity, reloading about 20 iterations of 500 could take 2 minutes.

The ability to open multiple instances is a blessing. I would not trade it for anything. However, it does open possibility for data inaccuracy if you use this method. Other users might make changes to the original datasource, yet you would never know it.

The ForAll function came out recently, yet I have not had a good amount of time to play with it yet. I imagine that you could work out a way to import or write multiple with it.

There is an article about “Import or export data from the Common Data Service”, does this "export" equal to what you said “export data link in CDM screen”?
https://powerapps.microsoft.com/en-us/tutorials/data-platform-export-data/

I just need export for now. I will try timer example but looks lilttle complicated.
https://powerapps.microsoft.com/en-us/tutorials/data-platform-export-data/
This export data link in CDM screen only works when you have less data. If I have 100k records in entity it does not export anything. There is a bug in this export.

Hi !
I was able to overcome 500 item limit without using N column and without modifying any existing schema!!
Thanks mr-dang and hpkeong for your suggestions. I used timer to do this with forall without adding any additional N column.

@AmitLoh-Powerap, can you share your timer solution with a timer and ForAll?

I will update over the weekend, its kind of slow but works. It can become fast but I was not able to update forall(forall does not allow to update a varibale)

I have a work around for ForAll not being able to update a variable, but it doesn't always make sense since ForAll does not necessarily go in the order you may want.

If you want a Count of things that are finished by ForAll, then you can use:

Then you can reference the variable as First(universalvariables).var.

Or you can use Collect and rely on CountRows instead. This requires you to clear the Count earlier:

In this case, you would reference this count as CountRows(countcompleted). ClearCollect does not work.

This is only useful for getting a count of items done by ForAll. I do not yet have a way to update a "variable" for Text or Boolean yet.

Please see my completely different solution!! This works but I need your help!

The flow has below steps-

For now its based on recurrance for testing-

Once you get last recordid store it in lastcount cdm table

This gives you 20 loops of 500 records each but now I need help in compose(previouscompuse+compose) 20 times and then convert it to csv. I noticed this process is way faster than timer based loop. 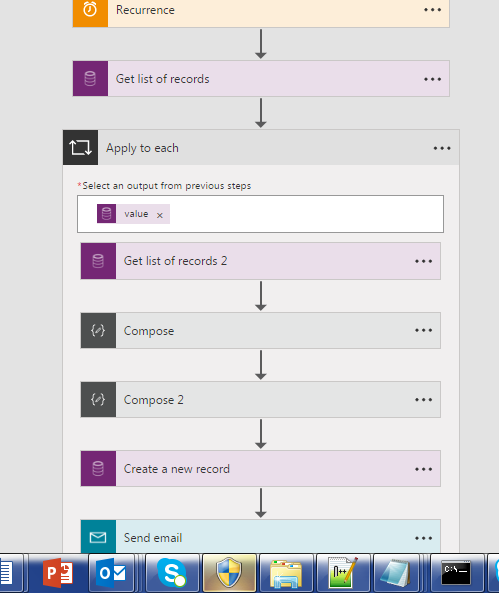 for getting last record refer this thread-

My other solution based on timer in powerapps works but its super slow-2 minutes to export 5k records but this one is around 30 seconds to get 10k! I need final 2 things compose all 20 500 sets into single entity and convert to csv either using json or custom api azure function and we are done!!