Assuming someone develops an app that becomes mission critical for a large number of people, it doesn't feel sufficient to have just a primary and secondary owner.

We're considering using a service account, but with different security sensitivities across different solutions, it also doesn't feel like just one service account will be sufficient. Taking it to the extreme, we don't want to 30 apps with 30 different accounts.

You can have as many owners as you want for one app. Just add the users as co-owners when sharing the app: 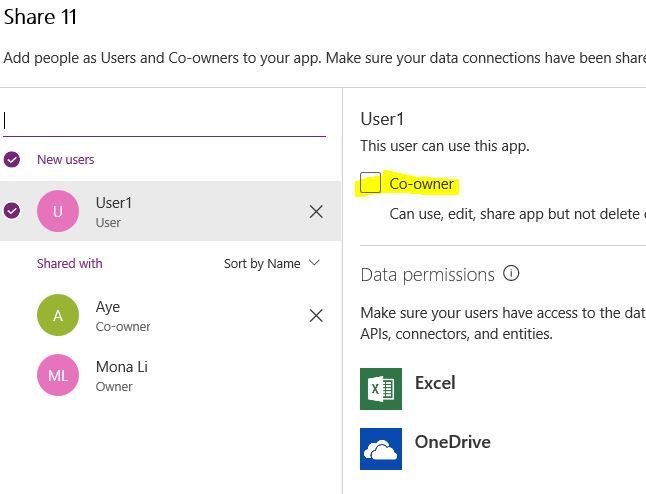 Kudo Kingpin
In response to v-monli-msft

That still doesn't feel like the best solution. Even if I had 10 additional people as co-owners. It would be ideal if we could find some way to separate ownership from our employees.

As an example, we're moving as an organisation away from a lot of 'applications' built in Excel. These are typically heavily customised spreadsheets with macros and VBA and so on, for which PowerApps is a much better solution.

But with Excel applications you could just copy them and 'deploy' them as needed. Ownership isn't a concept the user-developers have had to worry about in the past. My real challenge is how to introduce the concept along with some clear best practices.

I'm more concerned about the next scale, where we potentially develop an app for the entire enterprise, or one that we come to heavily rely on for some critical business process. That feels like it needs more than just a handful of colleagues with co-ownership.

It feels like this scenario isn't really catered for by the existing ownership model, and I wonder if the reason for that is perhaps that's not a scenario PowerApps is the best fit for?