Apps published today seem to be stuck in loading, Same app published yesterday works fine... anyone having this issue?

I published the app Last night, works fine... If Today, I open, Rename and publish without doing any changes, the Published applications seems to be stuck forever... Anyone hitting this issue?

Hi guys, had the same problem this morning, created an app on Friday, published this morning and it just stays on the spinner in the web player.

Thought is was because id copied an app and used it for the bases of my new app but just found this post.

Anyway after duplicating the app same issue.. exporting and reimporting same issue. stripping everything out the app exept a label same issue.

I then went in the app settings and turned off "Preload app for enhanced performance" and now the app loads in the web player.

Deffo an issue on MS end i think, Older apps not effected with this setting on, hopefully they will fix but at least my app works now.

yes, I have the same issue. the screen only show spin and not look app name

Even Creating a new App, with just a label, publish, not stuck in loading... Is there issues with Authoring Version? 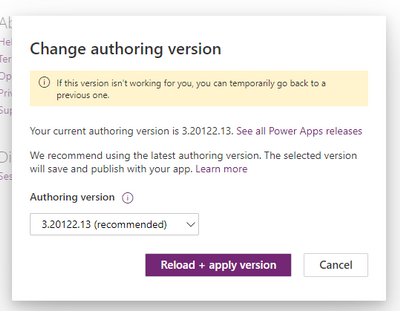 I have a call with Microsoft Support in 10 minutes, Will update you guys.

I have the same issue. Do you know to resolve that?

After a call with MS support, there was no resolution, I have a ticket still active, and see what happens... AFAIK, Any application we publish, is NOT working, no matter which Authoring version it is.  Even a blank Canvas app. I For now, the only way to run the apps is via the Edit mode in the Developer studio of powerapps, which is not a customer friendly solution.

I attach myself here. I republished an app and now it's not loading anymore. Fallback to older version didn't help.