Anyone experienced the following issue before?
I'm building a Change Control App. Data being pulled from a PowerBI dataset using the PowerBIIntegration connector and the App is embedded in another Power BI report. I'm doing this so that the data can be filtered in the report before it hits the Power App and so avoid the row restriction...seems to work fine. The final info is written back to 3 separate SP lists...again no problem. However, and this is a recent issue, I've noticed that a drop down that is populated with Project Numbers from the PowerBIIntegration source is now showing 'blocks' of repeated numbers rather than the list! 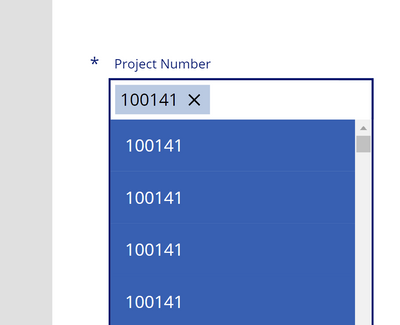