Played around with the new MS PowerApps template Book a room. Promising and just what i've been looking for.

Unfortunately I get a warning message on the ButtonMeeting located at the LandingScreen. At the OnSelect-field there is an warningtriangle and if I hover over it it says (freely translated from Swedish) Office365.GetEventsCalendarViewV2 failed: The GetEventsCalendarViewV2 method has an invalid value in the calendarID parameter. Sort of.

This probably is the reason that the PowerApp does not work:

When I click the Book for an existing meeting none of my meetings show up.

If I click the Book without a meeting and proceed with a booking of a room (all our rooms are listed perfectly), the booking gets confirmed in the PowerApp, but it doesn't show up in the room calendar in Outlook.

This is also an issue sometimes: 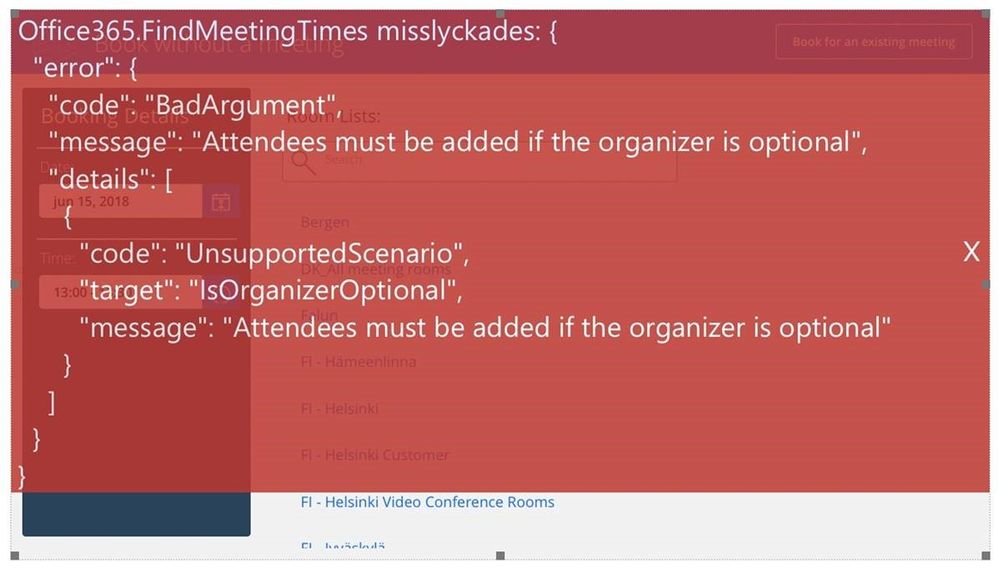 Re: not all rooms showing up

Since I was unsure when you had originally downloaded the app (we make incremental updates to the downloadable copy -- bug fixes, code optimization, etc.) it made it hard to compare if the fixes I was making would be applicable to your app. Thus I went ahead and pushed an update to the global app, so if you redownload Book A Room, the button should be appropriately visible if more rooms are available.

The issue, ultimately, is that the FindMeetingTimes operation we are using to check room availabilities only let's us use 20 people (rooms) per operation, so that's why you will only initially see (at most) twenty. If the majority of your rooms lists have more than 20 rooms in them, it may be worthy having 2-3 chained FindMeetingTimes operations called consistently... If the button solution fits the bill, then glad to hear, if not, I can walk you through how you would chain the operations to consistently collect room availabilities for >20 rooms.

Anonymous
Not applicable
In response to C_Ian_Davis

Has there been progress in this area?

Is this related to what suggestions are made for the FindMeetingTimes when we want it to identify what rooms are available? aka, the limitation?

Not on the globally available app, no. However, with the release of the new Concurrent() function, I think we can better get there. Essentially the FindMeetingTimes operation would look something like:

I'll do some experimenting with the app next week to see if this can be implemented in a generic enough fashion to account for rooms lists with differing numbers of rooms. Otherwise, if you are reasonably sure of roughly how many rooms are in each of your rooms lists, then it'll be more easy to do.

Not sure, if you will see this, but i get the same error message

tried following the steps mentioned but that didn't help. Although the Book without a meeting button works and carries over perfectly with to my room.

On other thoughts is there a way that i can display only a select rooms i.e. filter them through the email address that they have tried the Filter command and even IF statements but none of them worked.

Did you find an answer to this? I'm having the same exact issues.

Nothing yet, i was hoping some one would reply but haven't heard anything yet!! I would assume i have to go back and look at the syntax on graph api, but haven't had the chance to do that yet.

Anonymous
Not applicable
In response to iseth

Sorry to hear you're experiencing this issue. I will have this reviewed again and have a proposed solution added to the thread.

and where is the solution?