These input controls are being used for data entry. Randomly, when a user opens an app in a web browser or in the PowerApps mobile app on their iPhone, the controls will refuse to accept input. If the control is empty, nothing will happen when the user presses keys on their keyboard or keypad. If the control already has data, it will display those two blue "selection dots" as if allowing the user to select a range of text characters (similar to when you hold down on your iPhone to select a word or sentence in a body of text). This behavior is very similar to how the control would behave in View mode.

To resolve the issue, the user needs to close the app, wait a few seconds and re-open it. Repeat this a few times and it will randomly start working again. I've tried several things like re-publishing the app or opening a different app and then coming back and re-opening the original app, but I haven't found a pattern yet. Sometimes it works, sometimes it doesn't... it appears to be random.

The issue began occuring within the last two weeks, during which time there were no major changes to any of the apps in question. The back-end for all of the apps is Azure SQL. These apps contain material sensitive to my company otherwise I would share them.

Was there some code change or other update in PowerApps, perhaps introducing a new bug that would affect Text Input controls in this manner?

I've found another workaround. When the above behavior happens, if you select "Fit to screen" from the "settings" drop-down in the top-right, it corrects itself every time (so far that I've tested). 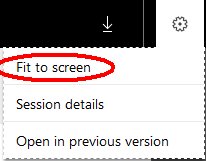 I cannot reproduce your issue, would you please record the session ID next time the issue happens?

Advocate IV
In response to v-monli-msft

@v-monli-msftHere is the session ID for one such session:

As soon as I clicked the drop-down to copy and paste the session ID, the issue stopped occuring. It appears to be a rendering issue with the PowerApps website, perhaps related to the web browser.