This has just happened on a large production app - when saved in 3.21123.25, the banner below comes up in the opening screen as soon as the app is opened on an iPad.

A heap of testing done this morning by myself and @Eelman (we work together) and concluding the following: -

Other than a bug (which it might be), has anyone else seen this ?

Hey James and the overall community.  I'm sorry that this change was disruptive.  You message has been received.

We know that changes will have an impact on all of you and we take it very seriously.  This is why we have a process for managing feature rollout, moving from Experimental, to Preview, to Shipped.

We have been working hard to graduate error handling out of the experimental phase and make it the default for everyone.  We are getting very close and it is our hope that this will happen in the next couple of months.  But to get there, we have to work through these changes to make the system more consistent, robust, predictable, and maintainable.  We of course also listen carefully for your feedback.

As experimental feature, we have always been very clear that error handling can and would change.  This article describes the status in more detail, Understand experimental, preview, and retired features in Power Apps - Power Apps | Microsoft Docs, but this is key:

For this reason, this feature is off by default and needs to be turned on an app-by-app basis.

All that said, we know that a lot of people depend on error handling, and this experimental feature has been experimental for a very long time.  That's why we are pushing so hard to get this to Preview and to a place where all of you can depend on it for production apps.  Once there, it goes under much stricter change control.

I can't speak to all of this, only the inability to back up to a previous version.  From time to time, we make changes  that require a converter to move the formulas and other serialization details in an app forward.  After this has been done, we can't easily move the app back, or we may apply the same converter twice.  Hence the block and the suggestion for you to back up to a previous version of the app.

All that said, usually these changes are not huge.  An app that has been upgraded within the last few weeks will be largely fine, although perhaps there may be a few errors that could be cleaned up.  I'm discussing with the engineering team if there is some explicit option we could provide for a maker to take things into their own hands and back it up a little.

No guarantees.  But we very much appreciate your input and I'm hopeful we can find a better solution.

Advocate III
In response to GregLi

Thank you for response, not only to myself, but to the community as a whole...

I do think you make a good point about the nature of "Experimental" and "Preview" features - I shall pay closer attention to which features I am using, and which category they fall into - Microsoft do indeed pre-warn us that experimental features may change suddenly and without warning, and you're correct - I can probably do a better job of managing that situation from my side.

That being said, I still believe there is something lacking in the Communication of Releases and Features - there doesn't seem to be a single cohesive strategy for these roll-outs, meaning that developers like myself often get blind-sided. - Releases are not advertised, and we never know when they are suddenly going to be applied to our Apps.

I also believe that Authoring Version updates should be "Opt-In" for us developers, and NOT Automatic, without a choice, especially if we are then NOT going to have the ability to roll back to the previous Authoring Version, should the need arise.

My suggestion is that we should be given a dialog box when opening an App in the Edit Studio:

No new features are reported in this update.

The following list details issues in Power Apps that are now resolved or updated.

"No items to report with this version.”

So, it looks like this release doesn't have any changes? Then why do a release? There must be something you're changing, but have decided that we don't need to know? Then just say "Internal Optimisations that do not affect Users or Developers" - saying that there's a release with No new features and No bug fixes just does not make any sense at all.... This sort of thing does NOT give us much confidence - what else is being changed without telling us?

Anyway - we all live and learn, but lets try and see if we can't both improve before the next major Update, and hopefully we can avoid this disruption in the future...

I was so happy to find this post!!!! Well, not happy because I have spent the last week trying to fix my app which suddenly stopped working. I tried EVERYTHING I could think of.....long days and late nights - and then out of nowhere I get the red error "Internal error with the OR function: Canceled: Canceled" which leads me directly to this post! and now I know what the issues are, and rolling back to 3.211123.25 fixed everything - that's the happy part. BUT I now have an app that could break at any time because my app has many nested galleries. My questions now is, Are nested galleries not going to be allowed in the future? Can we get some clarity on that please? (if so, I need to build an entirely new app that our entire company uses and relies on, and I need to know what I can and cannot do)

Are you having galleries loading/refreshing issues with higher versions than 3.21123.25?

Thanks for letting me know @PTadrous . At this point, I am afraid to change the version to anything but the one that is working, and I am working on making absolutely sure that everything is working before publishing my changes to the company. I will look at that post and make copies of my app and try higher versions than 3.21123.25 and report back. Right now, I am glad I have a working app with all my changes and need to focus on getting it back out there!

Thanks again - I'll be in touch

I am being told that I should find the cause and fix my app because I cannot stay a this version forever. The problem is, a monitor session gives me no clues. My app just restarts, and nothing is recorded. I have been trying to fix for a week and haven't been able to. I've even had two hour long call with a Microsoft expert, and nothing. Then I found this post and it instantly works when I go to 3.21123.25. So I am good for now.

Also, it's a super complicated app, built over 2 years - constantly tweaked when asked for new features. I really don't know where to begin.

I have a ticket in with Microsoft. Waiting for them to get back to me and start that process.

I also had many monitoring sessions to try to find out any errors, but nothing shows at all.
This is very clear that the changes that have been made by Microsoft in the versions higher than 3.21123.25 were not carefully handled in all areas, causing issues all over.

I'm also experiencing PowerApps studio failure behaviors with the new versions, where the PowerApps studio will just become all grayed out blank screen and nothing to do at all but restarting the session. Another behavior is that the studio will get stuck on the play mode and fail to go back to edit mode when clicking on the x icon, F5 or Esc.

Also the visible behavior of a form's Data cards, that are depending on variables, fails by not responding to the variable's true or false value.

Same goes for HTML Labels that are displaying values for variables of a record.

I understand that there is always a chance for mistakes, but i cannot see anyway other than doing the least right thing which is to postpone any released changes and roll back to a working version (3.21123.25), until all issues have been tested and resolved for public use.

We don't have to deal with platform issues for hours everyday before starting on working on our projects.

Sounds like we have very similar issues @PTadrous I am pretty much experiencing everything you are.....the grey screens, the studio stuck on paly mode, the variable issue.....

what do you mean by newly creating galleries? I have to delete them and recreate? that will take me days, maybe weeks.....there's no way to just edit them a bit and save?

I have a ticket in with Microsoft, and hope to get a Powerapps expert to look into and hopefully I get someone who knows their stuff and can work with me to get to the root of this. I'll pass along what I learn, but for now, I am back on ver 3.21123.25 and all is well again.....but I notice it's the oldest version available......yikes! 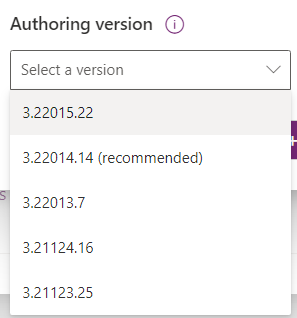 The new created galleries was something i found out by spending many hours on TESTING and playing with this nonsense. So If there is no straight directions from Microsoft regarding the higher Versions Behaviors changes, i wouldn't count on my testing as a solution. I myself can't consider the option of recreating the galleries in my apps due to the their complicity and the time will be spent on doing that.
Even though, this wouldn't completely solve the galleries issues, because the galleries still cannot refresh their data when recollecting the collection in the main gallery Items. (Galleries keep displaying the first query of the collection).

So this is the ONLY savior for now (The availability of 3.21123.25), other wise all apps either STAY the same with no new future editing or apps will break.

Not sure who should be reached out for this request, but we MUST have version 3.21123.25 available at all times while all new released higher versions are still broken and buggy.

@Ianbudson Feel free to include me, if you need to provide examples of other users with these sort of issues.