EDITED - based on more testing...

Starting 14 July, the PowerApps camera control on Xiaomi Android devices started behaving strangely - when the camera initializes the image is immediately 'frozen', there is often juddering and the colours are changed as though the red channel is not properly picked up. Both front and rear cameras affected the same way. Using the standard camera app shows there is nothing wrong with the camera itself.

This is happening on all/many of our Xiaomi devices but not on iOS or Nokia devices we have tested with.

The Xiaomi has quite a sophisticated multi-camera set-up, but that would not explain the issues with the front camera.

The PowerApps Player version shown on the devices is 3.20065.14 - I don't know when this update occurred as this site which is supposed to detail the version released appears to not have been updated since May https://docs.microsoft.com/en-us/business-applications-release-notes/powerplatform/released-versions...

* Any suggestions for fixing this issue?

* Anyone else start experiencing camera issues in the last few days?

Found info from Google PlayStore on when the last release of the Player dropped - 13 July.

MS, please note that this release appears to break the camera control on some Android devices - all our Xiaomi Redmi Note 8 Pros appear to be affected. If you can't prevent you updates from breaking production Apps you must allow a mechanism for reverting to previous versions. Our business is being severely impacted by this with no resolution at this time! 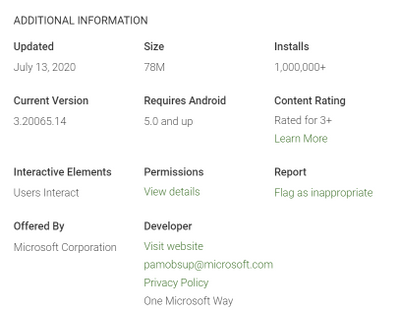 We are also experiencing this same issue on our Samsung (Android OS) tablets across our company. All/Most of the tablets are affected, and we have also raised the issue with Microsoft. It started around July 14 as well.

We have noticed that if you uninstall & reinstall PowerApps on the tablets, it temporarily fixes the issue. However, it's not a great solution because the fix is brief.

Completely resetting a device and then re-enrolling in InTune and reinstalling the Apps appears to resolve the problem for us, although that is not easy operation to carry out when managing a large number of users.

Have Microsoft support come back with a fix?

We have experienced a similar issue, where the camera in Power Apps starts to flicker. Native Camera App on Phone is fine.

The devices are Samsung Android Devices managed by Intune and have the intune mobile app installed.

Resetting the device seems to temporarily fix the issue.

Microsoft support have advised that we need to uninstall InTune , clear any cache and then reinstall. It also seems that only certain devices are affected.

The issue is now with our InTune team to identify the users still experiencing issues and work on those devices.

Anonymous
Not applicable
In response to PaulD1

Hello everyone, my name is Roy, i am 17 years old and work in an IT compagnie.

After searching for 6 hours, i found the solution. The camera doesnt work anymore because there is an aplication that got installed by android self. It is called "android system webview" you can remove it in the playstore. After rebooting it will work fine again.

I dont know about any other aplication will fail of removing this application. But the camera will work again.