In current version of studio, Container control have this issue (https://powerusers.microsoft.com/t5/Building-Power-Apps/Did-powerapps-update-break-container-control...)

so if possible, I want to restore Power Apps Studio(make.powerapps.com) to previous version.

Is there any way to change previous version or a solution to this problem?

In the account section, you can change the authoring version. Hopefully, that might fix the specific issue that you're having. 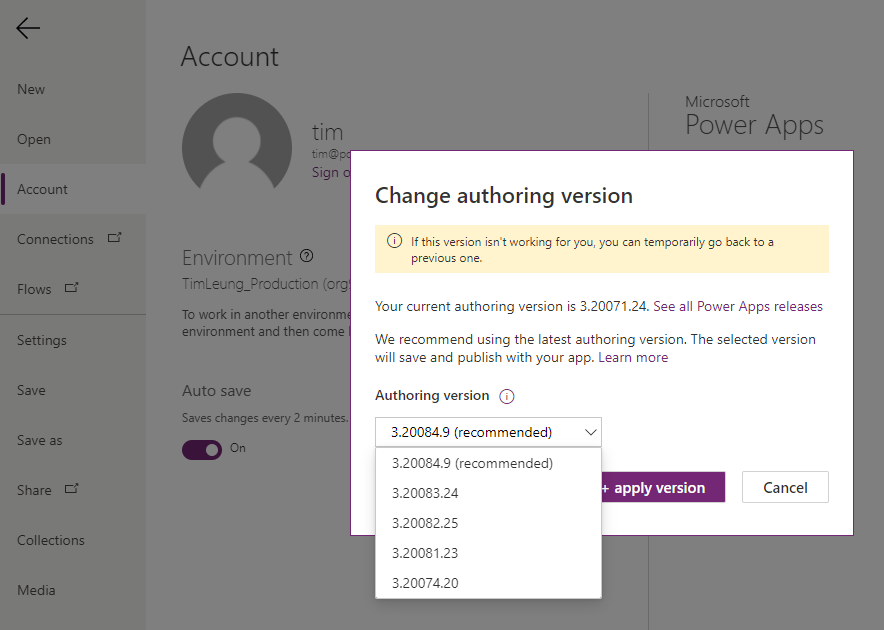 In the account section, you can change the authoring version. Hopefully, that might fix the specific issue that you're having.

As @timl  mentions, if from create.powerapps.com studio page, select "Account" then on the right hand-side pick "Change authoring version" .. it's probably currently showing 3.20084.9 so I changed back to 3.20083.24 and that fixed the issue so it appears this issue (with container items UI) is caused by the rollout of 3.20084.9

By the way, it appears this change of authoring version is only for that session and reverts back when you exit 😞 so you have to do this each time you login.

This, along with a number of similar situations I've coma across, raises a number of points that need to be raised which I'll do in separate post but basically Microsoft need to address the following for PowerApps developers/users :

1) There needs to be a more public way to register bug(s) with PowerApps, both build and runtime environments so everyone's aware of bugs as they occur to prevent both wasted time and duplicate reporting etc.

2) There needs to be public access to a "bug list" database so developers can check first there when they're experiencing issues to see if it's an already reported bug etc.

3) In the webpage list of of release versions there is never anything in the "New Features" and/or "Fixes and Improvements" documentation which is the purpose of the page otherwise what's the point of having release notes/versions?

4) New versions should be an opt-in option (like with most other software VS, Xamarin, etc) and not automated "push" as the result is errors such as this without in most cases knowing that a new release has been pushed.

PowerApps is a great product and is being used my many and I love it 🙂 but ... Microsoft need to bring the support aspect for developers in line with what they provide for areas such as Visual Studio, Xamarin, etc., where good bug/release procedures and documentation is in place.

Excuse my rant 🙂 hopefully this will help with your issue

Thank you for reply.

I tried to change Power App studio Version, But There's no changeable version in Option. 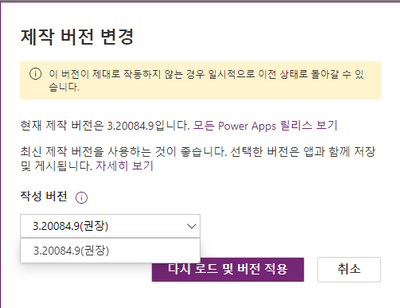 Is it impossible to change the version, if there is no record of the version below the current version?

Advocate II
In response to 3R_L

@3R_L  .. I did come across similar situation once yesterday when doing this and found the following helped ..

Make sure you sign-out completely and close the browser completely too .. then .. open a new browser session and go directly to create.powerapps.com (don't open/edit an app via make.powerapps.com) and then select "account" and "change .." and see older versions now show in drop-down list.

If the previous versions don't appear in the dialog, I'm unfortunately not aware of a way to change the version.

However, I suspect you probably won't be able to open your app as it was authored with a higher version.

Thanks for taking the time to share this. I agree that your suggestions would make it much easier for PowerApps developers/users.

@heather_italent @chass  - would it possible to bring Derek's comments to the attention of the product team? He raises some excellent and productive points, and it would be ashame for this to be lost in the middle of a forum post like this.

I am trying to change version on another app, but I get this message.

P/S: I tested it the other tenant, It show the same as this problem.

Power Apps User Groups are coming! Make sure you’re among the first to know when user groups go live for public preview.