I originally created my app from the make.powerapps.com page, and used SharePoint as a data source, pulling data from 2 different SharePoint Lists into the app. However, I need to filter the data from one list (Gallery) based on the selected data from the other list (Form). I found a tutorial for this but the filter formula references the SharePointIntegration control. In the tutorial, which was made in 2018, his Power Apps editor interface looks signifantly different from mine, and he has the SharePointIntegration control in his Tree view.

Where is this SharePointIntegration control and how do I reference it, or do I need to?

The filter formula referenced in the tutorial is exactly this:

And I adapted it for my Form and Gallery like this:

But it's just not working! Both Assessment ID fields are numeric (from the SharePoint Lists). What am I missing here? Do I need to reference the datacard value instead? How did the developer in the tutorial get it to work without that?

Here's a link to the tutorial I'm referring to: https://youtu.be/A-pJB-ufKa8

Currently, the SharePoint integration appears when you customize a SharePoint form using PowerApps: 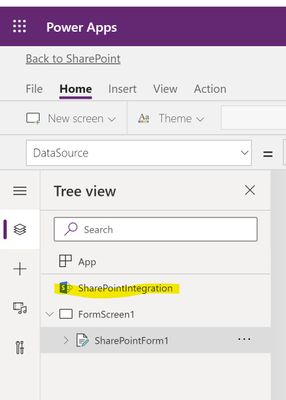 I created an application from scratch selecting SharePoint as data source and the SharePointIntegration doesn't appear in those scenarios.

If this reply has answered your question or solved your issue, please mark this question as answered. Answered questions help users in the future who may have the same issue or question quickly find a resolution via search. If you liked my response, please consider giving it a thumbs up. THANKS!

If this post helps you give a :thumbs_up: and if it solved your issue consider Accept it as the solution
Message 2 of 3
488 Views
0 Kudos
Reply

Hi @Katrina_Frigeri ,There are two ways to build an app based on a SharePoint list.
The first is the way you have done it by going from make.powerapps. com and selecting SharePoint, locating the list that will be your data source and allowing PowerApps to create the app.

The second way is via SharePoint and it is done simply to create a PowerApps user interface for entering data into the list.  The SharePointintegration control is created from SharePoint when this option is chosen.  You will not see it when the first method is used and you have become confused by trying to work with something that does not exist in your app.

When using the app created by PowerApps from a SharePoint list as you have done, you will start with have three screens.  A gallery screen showing all the records, a view screen for a single record that contains a view form and an edit screen for a single record that contains an edit form for entering a new record or editing a record selected in the Gallery .  You can then add another list to the app. If you want to filter your data in the gallery by items in the second list, there needs to be a common field in both lists.  One way to do this is by adding a dropdown control to your gallery screen with its items property being your second list and filtering the gallery based on the value selected in the dropdown control.

In this case, the list of contacts is filtered by the dropdown that contains a list of all the state abbreviations. Since a dropdown control contains an entire record, the common field does not have to be the one shown in the window of the control.  For example the filter on the gallery could be

The Value selected to show in the dropdown control could be the text abbreviation, even if the common field is the ID for the state. 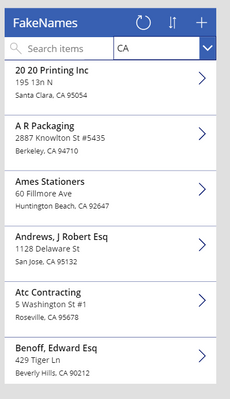 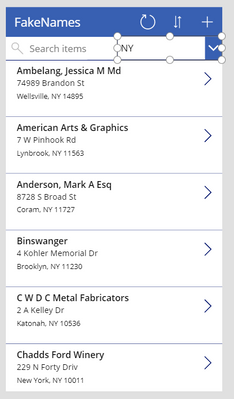