I have a SharePoint list, Expense Report, that is going to be used to record expenese incurred on projects.  This list has 2 SharePont lookup fields from 2 other SharePoint lists - Clients and Projects.  We'll first select the Client and then based on that the associated Projects would be displayed for selection.  Previously, I had done this using galleries and within the edit form the Client and Project fields were automatically populated with the selections made within the galleries (I used WonderLaura's videos/blog posts).  The fields within the edit form were the Lookup control that was provided; however, now it seems the Lookup control has been replaced with a Combo Box control.

I have not been able to find much guidance on the use of Combo Boxes and it is unclear to me what properties to use and modify in order to be able to record the selection of Client and Project from the galleries set up.  This is the formula i had previously used for the Lookup controls for the Default property of the data card:

Does anyone have any recommendations with how to achieve cascading combo boxes and create records for a SharePoint list using customized PowerApps forms?

I'm sure we going to find a solution to your problem... 😉

Could please first give me the data type for your Business ID and some examples of its value?

Hi @R3dKap  Thanks for finding the time to reply. Business ID is GUID.

So Business table can look like this (for simplicity purpose):

Hi @R3dKap Don't mean to rush, but should I post this as a separate question?

Ok... So... Going back to your original post reminded me that your Business ID and Sub-business ID columns are located in entities. I'm not very familiar with entities yet (just starting to work with them these last days actually). Nevertheless, I'll try to figure something out...

In fact, the best way for me to help you si that I reproduce your case on my personal tenant. Could you please describe tell me how to create these two entities? I mean, I know how to create entities, but just... may be... if you could post here captures of the fields inside the entites, the relationships, and give me as much details as possible so I can recreate these entities on my side.

Then I'll setup the combo boxes for you.

Waiting for your inputs...

Hi @R3dKap Of course. So the first entity (Business) is very straight forward. You don't need to create any extra attributes there. The 2nd one you create (Sub-Business) will just have 1 additional attribute that you will need to setup as in the screenshot below:

Data Type will be Lookup and Target Record Type will be the 1st entity you created (Business). It will default the Relationship Name which is pretty meaningless, so keep it the way it wants to name it. You don't really need to do anything else for this particular purpose.

Once again, thanks for taking your time trying to help!

Ok, so I've reproduced your entities on my tenant and created an app to make the two combo boxes depend on each other. Here is how I did it... 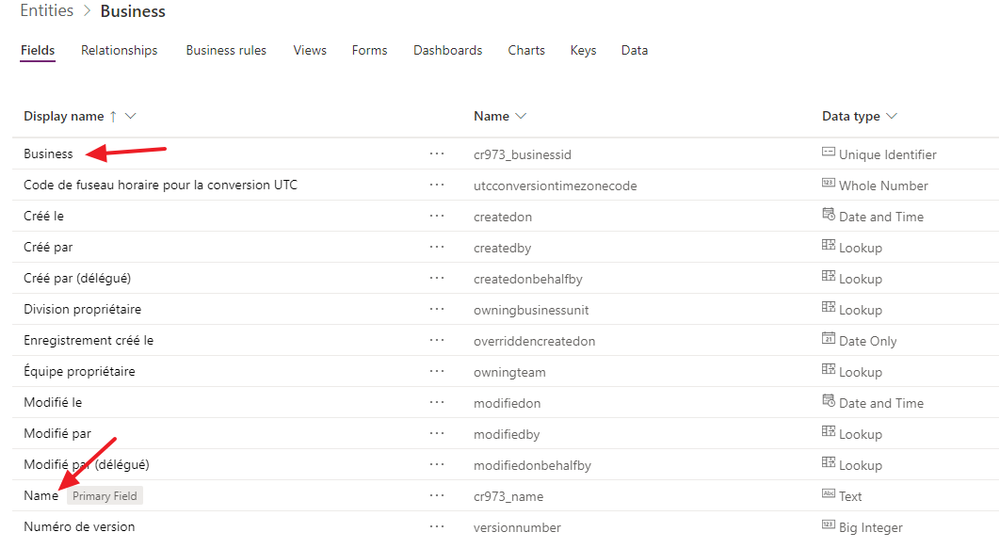 The Name field is the custom field I created when I first made the entity. The Business field was automatically generated by the system (to identify a unique entry I suppose; again, I'm not too familiar with entities yet). Same here, for the SubBusiness entity. Except that the Business field was (I suppose) automatically created when I set up the relationship between the two entities.

How I linked the two combo boxes:

Then the combo boxes worked fine on my side.

Try it and tell me if this works for you as well...

Hi @R3dKap Thanks for going an extra mile! So I tried your approach (still not sure why it doesn't put together the right formula when you use Depends functionality) and it didn't work at first. I was playing with different combinations and finally it worked (just mostly because of the brute force and not common sense). Here's what worked:

As you can see, the syntax is exactly like yours and the only difference is the 1st parameter. It seems like it didn't understand the entity name as the first parameter in the Filer function but it understood the actual control name on the form (I assume this is what [@'Sub Business'] is referring to? Very strange syntax indeed. But I'm really lost why it worked for you but didn't for me. There has to be some sort of explanation?

I'm glad it finally worked! About the [@...], it's called the disambiguation operator (Disambiguation operator). It's used to differentiate columns that have the same name in complex formulas. I noticed that sometimes, datasources are also automatically referenced using this operator but I must admin I don't know why... Still strange things happen in Power Apps... 🙄

My issue almost similar to yours, instead of CityName and Country, I have Technology and Category. But when I replaced the names from your code, I am getting errors in Id (It says "Name isn't valid, Identifier isn't recognized"). What is Id here, Can you please help me.