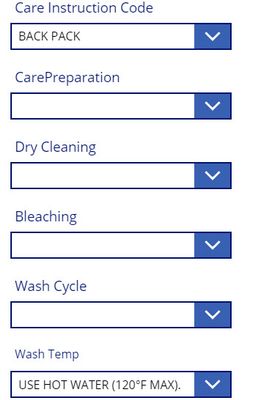 In this example the Care Instruction Code dropdown is set to "Backpack".  The USR_AX_PREP_CODE for backpack is 14 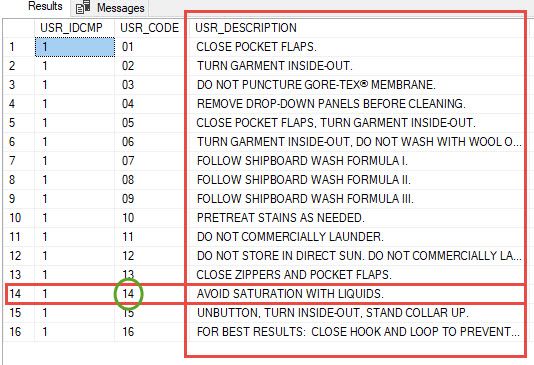 As a result...The second dropdown "Care Preparation" should be populated with the USR_Description entries from USR_WASH_PREP with focus set to USR_CODE 14 "AVOID SATURATION WITH LIQUIDS".

NOTE:  For the NewForm functionality the Cascading Dropdowns should be prepopulated with the "Suggested Values"...I say "Suggested Values" because they are not hard and fast rules, they are guides.  The users may changed the values.  The EditForm functionality will show the user entered values by setting the "Default" value.  Ex: LookUp(USR_WASH_PREP,USR_CODE=Parent.Default,USR_DESCRIPTION)

I would appreciate any help in this matter.  I tried using the "Depends on" feature in the properties but it seems to be geared for a one-to-one looked.  Since I need to use this "middle" supporting table, things got a little difficult for me.

If figured out my mistake.

If figured out my mistake.