Change between NewForm and EditForm in Preview

When I preview my app, it always shows the EditForm view. I need to test a behavior for the NewForm view and I'm getting tired of publishing over and over so I can test it in SharePoint.

How do I switch between EditForm and NewForm? 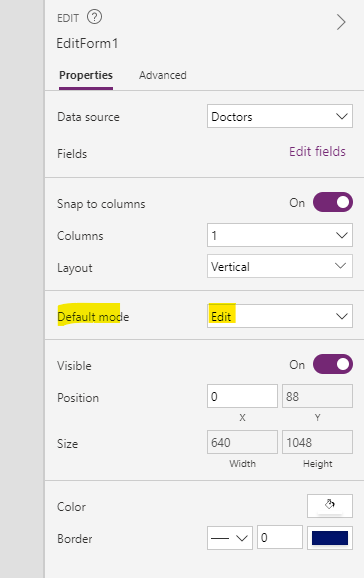 So that has nothing to do with the way the form performs "for real"? It's just for the preview?

The default can be set  to New in preview so that you can see the cards  but in real mode, the default is usually changed  with either NewForm(Form1)  or EditForm(Form1) in the function that selects the form.  Ie. an icon that navigates to the screen with the form such as Navigate(Screen1,None); EditForm(Form1)

So the preview isn't the same as running it, which is why the variables and data don't reset every time?

There are a few differences between the preview when you are developing the app and what happens in the actual production version of the app but very few in my experience.  When you are concentrating on a single screen during development, some of the variables may not have been instantiated, for example,  if they are created at Navigation from another screen.  To really see if they work, you may have to go into preview mode and start in the first screen at the beginning of the app and move to each screen to see how it works.