I'm having a couple of issues with Comboboxes within an app I manage. I'm using an Azure SQL Database as the data, with multiple related tables within it. I have a number of forms that use comboboxes which are then patched back to SQL (no issues), but some of the combo boxes have been displaying some weird problems:

I have all the comboboxes attached to "Reset" buttons or similar, that update a context to true then false. e.g.

The DefaultSelectedItems for the combo boxes is set to [] and the Reset quality set to the context variable "ResetCombo" (or similar). Like so:

95% of the time this works perfectly, but say I edit something else in the app this then craps out and stops working. The only way to get it to work again is to re-add the [] to each and every combobox. Which is annoying to say the least as invariably I don't notice until I've republished.

Problem 2: Incorrect Fields Displayed (or trying to be displayed)

Probably more annoying, is the way that my combo boxes (the data for which is taken from SQL table that basically forms a list to pick from) seem to be constantly trying to link to the wrong data. For example, if I have a "double" combo box linked to a table that is a list of "Types" that have a "TypeName" and "TypeDescription", it seems to work fine for a while, then randomly it removes the "CategoryName" field and switches it with a "CategoryDescription" which is a field from a completely different table.... 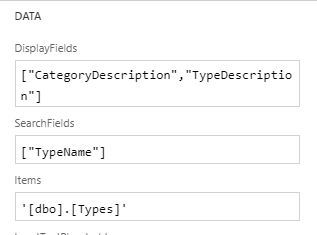 Again, if this happens to multiple combo boxes (which it does), the only way to fix it is to either delete the combobox and start again, or to manually overwrite the incorrect field with the correct one.

The fields used by these combo boxes are all nvarchar() and again, this seems to happen if I make a change in the app. I thought it might be because I copied the combo box from one that was already linked to the erroneous field's table, but even when I create a combo box from scratch this happens.

Does any one have any idea what's going on with these problems? Is it the way I've got my SQL tables designed or is it that I'm using SQL Azure or is it genuinely a bug? Equally has anyone else been experiencing this?

We have also been experiencing these problems. Today, our Display property on some of these comboboxes were lost and started displaying the first field in the datasource.

In addition to this, we have also found that the reset takes place on both switching from true=>false and from false=>true as per the below article.

There does seem to be something weird going on with the comboboxes at the moment.

I don't think I've experienced the problem you're having with rest occuring on both True and False, but have you tried making the "Default" or "DefaultSelectedItems" a variable too? This is a trick from @hpkeong.

On the "On Start" property of the app, create a variable for:

Then make this variable, the value you put in the default (and continue with the true/false context updates). I've just applied it to an app of mine which seems to be working fine - lets see how long it lasts!