I added the Owner field to a form that is working properly, but the data card says "Add Item from Insert Pane". If I select DropDown it just displays a sample list of numbers....How do I get this (or a better Input field) to display the Users (Owners) in it?

The owner field is a polymorphic lookups field in CDS, If you want to show the Owner on the form, please follow steps: 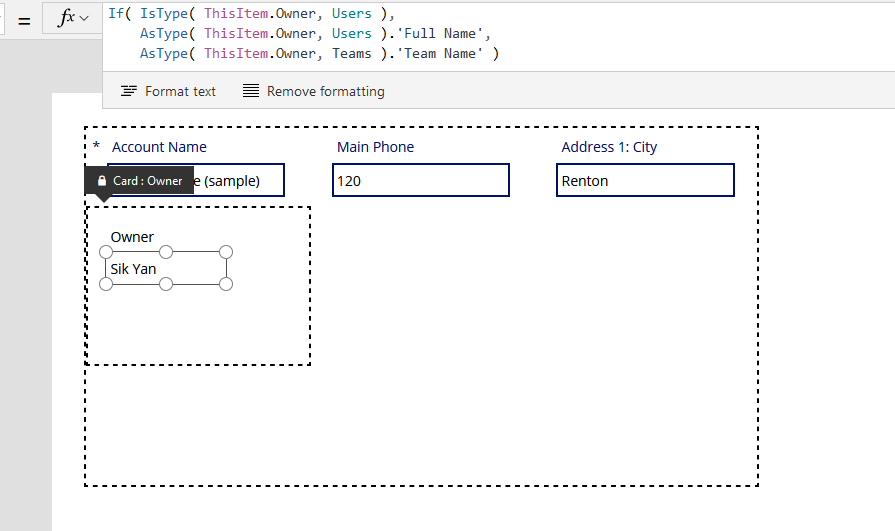 In addition, I can add the Owning User or Owning Team fields as separate fields, but it appears we can't use 1 field for both as in D365. Maybe no viable solution at this time?

To confirm, you are using a model-driven application and form. Correct?

If you are using an entity which user-owned, instead of organization. You will only be able to add the Owner field to the form/header, and it will

Although you have likely seen the OwningUser and OwningTeam attributes in the solution viewer, or canvas app studio, you cannot show these independently in a model-driven form/view/etc. That being said, there would be no advantage to doing so - since the record can only have a single owner at a time; either a User, or a Team.

Finally, you should be utilizing the Assign button primarily for updating the Owner field. While you can technically update the field via the lookup, there is a built-in mechanism which handles this type of update correctly. https://docs.microsoft.com/en-us/powerapps/user/assign-or-share-records

In my experiences, the UX for touching the Owner lookup is poor. You will either use the Assign To button, or dynamically set the owner using a synchronous workflow based on another updated. Example: when Territory changes, assign to the Territory Owner (Manager) dynamically.

The owner field is a polymorphic lookups field in CDS, If you want to show the Owner on the form, please follow steps: