I keep having real problems with data cards in a detail form not doing what I tell them.

And it is really inconsistent - some behave, some don't

I have a very simple SharePoint list but with a very big number of columns that I am using as data source for a canvas app.

Because I have so many columns but most have a short title and a small piece of data (like, "Viewers" = 6) I want to shuffle the data cards up to make more space.

By default most of the data cards I added have .height = 103.  I have tried changing these but whatever I change them to they all revert back to 103

Other data cards by default have .height = 73 (And don't display the data).  I can change these to any height I like and they stay there and if I set them to over 100 they display data.  So I have set all of them to 103

Now to try and position them where I want ...

Now it gets tricky!

But instead it sets itself to .x = 0, .y = 2060 and disappears to the very bottom of the form.  Setting .x and .y to any other figure have no effect.  I can get it back up the form to any level I like by drag and drop.  But it always has .x = 0  As soon as I change that it disappears back to the bottom of the form.

Thank you for any help you can provide.

I think you might benefit from using multiple edit forms on the same screen. I often break up my content into different forms if they require odd sizes.

I used to try and fight with the auto positioning and sizes and whatnot. I started to lose my mind until I just started putting it separate forms. 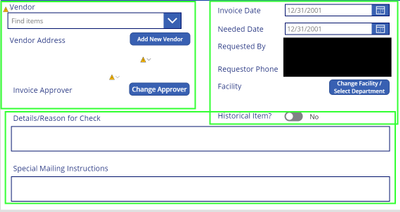 Then for the submit formula, you use something like this:

Advocate II
In response to notj

Thank you for the idea notj but isn't it just a bit rubbish to have to use such a complicated work around for something that should be so simple?

@GuyBoswell If you've worked with Microsoft a lot over the years, you should probably be used to it by now.

Sure, you would think just resizing some controls shouldn't be an issue. I agree. But unfortunately, it is. It's a huge pain point and you'll find similar workarounds suggested all over these forums.

When I think about how much time and effort goes into getting a single form with lots of controls to play nice, or 3-5 forms with a handful of controls each, I much prefer the second avenue.