DropColumns not really dropping the column

I have noticed this issue (or maybe behaviour) many times but now I'm stuck with it and I think it's time for me to understand what is really happening here.

To give some context:

So to clarify, I'm specifying as the record clause of the patch function the table 'mant.equipos' without the column 'activo' and with a new column 'activo' added to it which is false for all records. This ends in an error message saying that "there's already an 'activo' column".

SO HERE IS THE PROBLEMATIC WITH THE DROPCOLUMNS FUNCTION:

As far as my understanding goes, when I use the Addcolumns() function and I pass the first argument to it (the table filtered and with the column 'activo' dropped), this argument should not have a column 'activo' already existing, BUT lets give it the chance (maybe the name is already taken in the background or something). So, lets make clear that DropColumns work.

For the sake of the science I'll create a collection to show if DropColumns work: 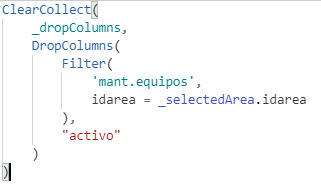 This is the argument I'm passing to the AddColumns within the Patch function. But lets see, what do we have in this collection? 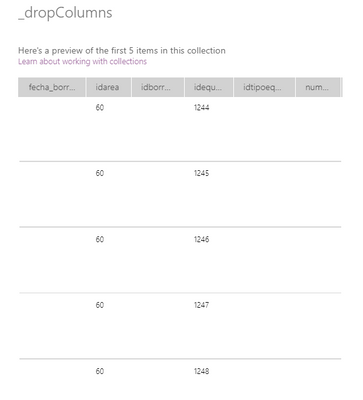 Great, not an 'activo' field in sight! So now, can I add a columns named 'activo' to this collection?

Now, look at the collection again, no 'activo' column in it.

So the question is: Why does this happen?

Also I know the real solution because if instead of doing the DropColumns, I use ShowColumns specifying all columns but 'activo' it works. Here yoy have the proof of it: 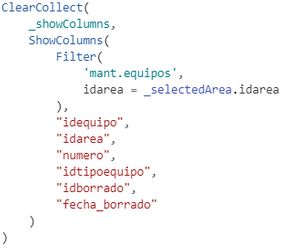 And the original problem solved here: 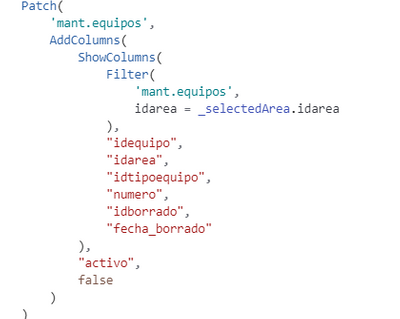