Is it possible to "edit a form" from a list with existing ID, and submit it as New? (Different ID).

This is so that if there are similar Forms, do not have to repeat all similar Items and only change the needed ones.

Helper III
In response to CNT

Thanks finally got it to work.

Though I used the Item: ItemCard.Update instead so that it is easier. But did it 1 by 1 sadly, string became so long  specially with the choices one since i was using microsoft.azure. I used patch method as it seems to be more useful in the future. difficult though 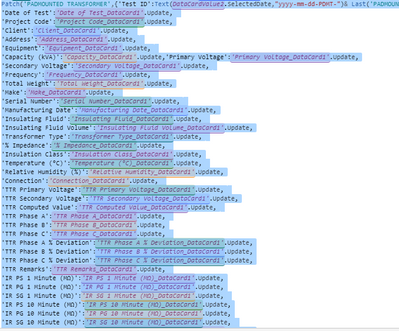 and so on, the text was easier due to consistency.

the choices not so much 😞

but thanks your advise worked.

Please accept the solution so that it will be helpful for others in the community.

So I was done with patch and it is now working. However, it seems that patch is bypassing the requirement of forms to prevent required fields to be filled up similar to submit form.

Is there a quick way to check if there are blanks?

@grapejuice you can use the validate function. For more info see here, https://docs.microsoft.com/en-us/powerapps/maker/canvas-apps/functions/function-validate