Encountered an internal error when trying to evaluate this expression

I have two Choice columns in that list configured the same, but different values.

In Power Apps I am trying to lookup a record and return the values in those columns.

One works the other does not and just says "Encountered an internal error when trying to evaluate this expression " but it does not give any errors in the expression? And the Expression should work exactly like the other...

I have changed things around a ton but I cannot get this one column to return a value??

Formula in Power Apps on Start 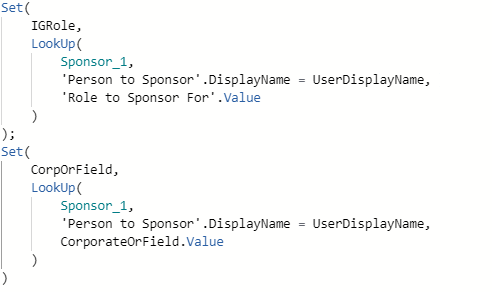 The CorporateorField.Value returns a value correctly but the Role to sponsor for shows this when I click on the formula:

This is driving me crazy, should be exactly the same pulling from both? What would be different?

So I figured it out,

Turns out with my testing I had created two items in the list where Person to sponsor column was the same and both had the same answer for the corporateorfield column and only one (the newer one) had a value selected for the role to sponsor for column... thus the code above, was working, it just was returning a different record that I didn't know about, so looked wrong.

Once I remove the older item then everything worked.

I can see a case though where we have the same person elected for more than one sponsorships... the way I am working around this, which seems to work is sorting the list by modified date.

My question is, is this the best way to go about this?