Hopefully this is the right forum to post this. (There's a PowerApp and PowerAutomate flow associated which I'm having issues with)

I've built a solution within PowerApps and PowerAutomate whereby a customer can use a Pen Input to write their signature. That signature is then converted to JSON and triggers a PowerAutomate flow which adds it into a pre-written HTML template to create a signed document by the customer.

This all works absolutely fine, it's tested and works flawlessly.

What I'm now trying to do is capture the pen input JSON/Binary Data data into a collection within PowerApps along with the customer name which is recorded in a Text Input. (Example of collection below). My intention behind this is because I want to send multiple values from PowerApps into PowerAutomate. 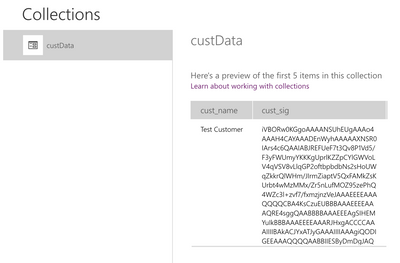 I then have a button in the App which triggers a flow called 'Molly App - Data' using the following code:

Within the flow, there's a Parse JSON command which parses the 'cust_name' and 'cust_sig' values from the collection in PowerApps.

If I test this flow (without it creating any kind of documents), it runs successfully and even adds the values from the collecton into variables: 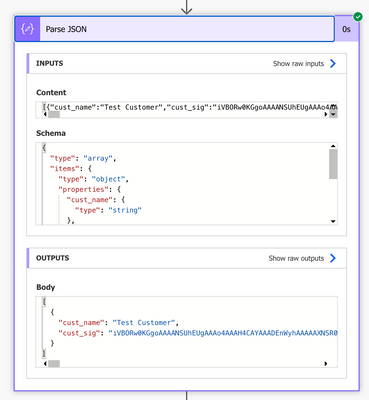 From here, all I want to do is retrieve the values from the variables (or straight from the Parsed JSON above) and create some files.

As an example, lets say I want to create a .jpg file in OneDrive using the 'cust_sig' data as the file content and the 'cust_name' as the file name. 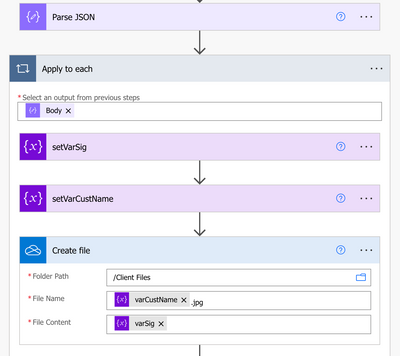 If I then press the button in PowerApps to run this flow, I'm greeted with the following error IN POWERAPPS:

(Apologies for the bad quality, had to take the photo on my mobile)

What I don't understand is - Why does the flow run perfectly fine up until I try to add a 'Create File' action? Why does PowerApps not like the flow if it tries to create a file?

I've tried different variations of 'Create File' but nothing seems to work and I'm completely stuck wrapping my head around this. The second I remove the 'Create File' action from the flow, the PowerApps button and corresponding flow run perfectly fine again.

Hi, after you added the OneDrive activity, have you either "Refreshed" the Flow connection in PowerApps? Or if you don't see a refresh option, remove the flow and add it back in?

If the Flow was added to PowerApps before you added the OneDrive activitiy, then the connection to OneDrive will not be established on the PowerApps side.

Hi, after you added the OneDrive activity, have you either "Refreshed" the Flow connection in PowerApps? Or if you don't see a refresh option, remove the flow and add it back in?

If the Flow was added to PowerApps before you added the OneDrive activitiy, then the connection to OneDrive will not be established on the PowerApps side.

Yep, that worked. I feel so stupid not realising the flows needed to be refreshed within PowerApps everytime they're changed.

Solution Sage
In response to MRFitness

It would be nice if they pushed notifications to PowerApps, or just refreshed them automatically.... But just one of those things you have to remember 🙂