Form Reset on button - can't save after, because required fields

I have created a PowerApps custom form for a SharePoint list.

I have one screen, which has a link to a second screen ("NewClient") which allows to create a new item in a other SharePoint list. The second screen contains two Input fields, a save button and a cancel button. After Save and Cancel the user is navigated back to screen one.

My problem is, that when I opened the second screen, click on cancel and got navigated back, I can't save the form, because screen two contains 2 empty required fields. 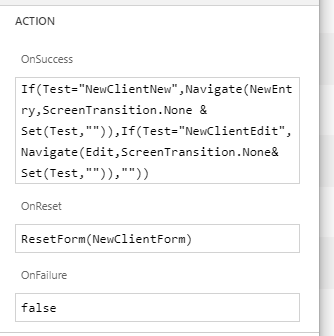 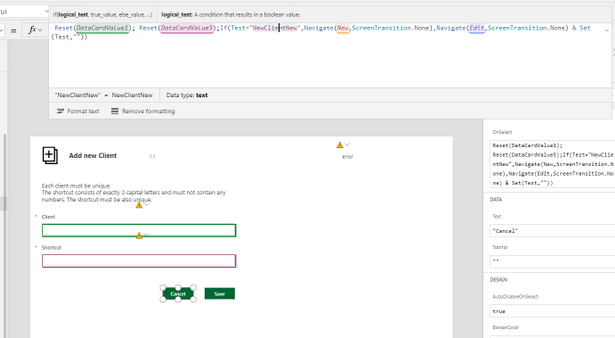 So, how can I reset the form/the datacards that if I open screen two and cancel it, I still can save my screen one?

I'm using the "Resetform()" right now. Which I also did in the first place, but I was missing two things. First, I separated the formulas with a ; instead of combining them with a & and the second, I missed to set a variable in my App, which was necessary.

So typical case for "Layer 8".

If I understand correctly, the second screen would be providing the info that is missing on the first screen. If the user does not provide necessary information, you don't want the form saved. If they cancel the creation of a new client, they need to provide a current client for the first form - right? Then they can save the form.

If this is incorrect, please provide additional info so we can help.

I have a drop down on screen one, which is a lookup. If the necessary client is not there, the user has the possibility to go to screen two via a link and create a Client there. If he creates this customer on screen two and saves it there, he will automatically return to screen one and can also save the form.

However, if the User inadvertently clicks on the link, or finds that the Client already exists when creating the form, he has the option of clicking on Cancel and selecting an existing Client on screen one. Screen two was therefore only called up by mistake.

As soon as screen two is called up, screen one can no longer be saved. This should not happen. As long as all mandatory fields on screen one are filled in, saving should be possible, independent of screen two.

Are you still having problems with this topic or have you resolved it?

I'm using the "Resetform()" right now. Which I also did in the first place, but I was missing two things. First, I separated the formulas with a ; instead of combining them with a & and the second, I missed to set a variable in my App, which was necessary.

So typical case for "Layer 8".

Please join us on Wednesday, July 21st at 8a PDT. We will be announcing the Winners of the Demo Extravaganza!