Form outside of any screen

I do not know how it happened but in my PowerApps Studio is a form outside of any screen.
It has the "delete" option, but  I can not remove it.

Is it bug or functionality? 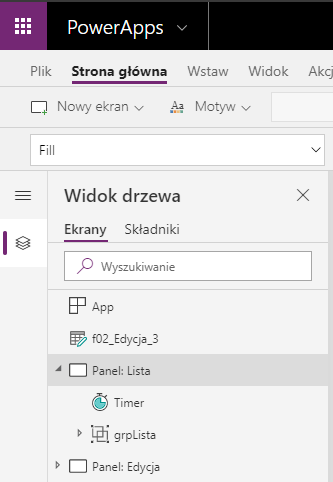 That is really strange.Please submit one ticket here:

And if you have solve your issue please update here.

Do you have this issue before?

Is this App you created or  shared by others?

Could you please try to clear cache and cookies or change other browsers to test?

Could you please turn off  “Improved app rendering”  in you App settings->Advanced settings panel and try it again?

After I wrote the first post, I back with application version until there was no error. After several savings, its occur again. In my opinion, off-screen controls become part of the source code of the application as soon as they appear, because their names are names originate from other controls. Deleting the "source" controls does not affect the error. When the error occurs, the "close" option in the "file" menu does not work. I am the creator and the only developer of this application. I tried everything what you ask and does not change anything.

That is really strange.Please submit one ticket here:

And if you have solve your issue please update here.

I have this same problem.

I thought that this wasn't causing any issues but when I tried to make a small, insignificant update to this app, it became completely hosed, acting in a bazaar fashion, and ultimately crashing and becoming unusable. This is reliably repeatable.

Of course the update I was trying to make was to accommodate another facility using the app on rather short notice. Another project that likely cannot be delivered on time due to an unexplained issue. I know, I can rebuild the app from scratch or restore a versions from a hundred versions ago (harder than just rebuilding it actually) but when you have many apps, and these issues become common, it seems sometimes as though all you ever do is troubleshoot and try to limp these along.

I don't expect any solution to this but wanted to warn others... when you see this, you may want to start the rebuilding process because it is probably over at this point.

In case anyone cares to investigate, I left this shell of an app, with one screen, no data connections, but with a form outside of any screen. The form cannot be renamed, deleted and errors generated by it cannot be access (nothing happens when you click them). There appears to be no way of recovering from this unfortunately.

Form Outside of Any Screen Session details