I have a component that suddenly started reporting a formula error. The issue is that the error is on the .Y property of the component, which shouldn't be editable on the component itself. Seems like a bug. Anyone know of a way to clear this error?

In case anyone else runs into this issue...

There is indeed a bug with components, where a property of the component (it also was Y for me) that is not accessible in the designer somehow ends up with a value in it. I tried manually ripping apart solution file and re=importing back overtop of the corrupted component (not a process for the faint of heart) but couldn't manage to successfully repair the corrupted component. I eventually just restored an earlier version.

Thank you for this Dave, I had the same problem, the error in the designer stated there was a problem with the Y property of the component, which we can't edit directly, as it's only editable in an instance of component within the screen pages of an app.

I exported it into a zip, opened the zip, found the .msapp and renamed this to a .zip. Opened this up and searched throught the json files in the component folder for the component name in vscode, and found the right one. I did search for "Y" and the first one came up: 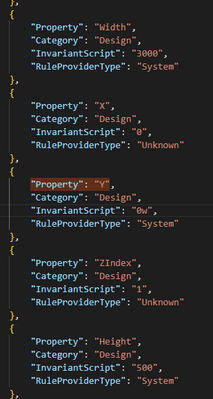 Somehow "0w" had ended up as the Y  property. You can see the others I've clipped for Width and X are numeric. I changed this back to 0, saved and renamed the zip back to .msapp and packaged it back up as per the downloaded zip. I imported this back into powerapps and all is fixed now.

Just wanted to put this out there in case someone else has a similar problem.

When you save the JSON file, make sure you undo any formatting you've applied to make it easier to read, I've had an issue before where this hasn't worked in uploading it back due to it not being minified as per the original file structure.

Great - I'd tried the same process, but failed on the re-import so I must have made a procedural error rebinding everything back together. The removal of formatting, I might not have done that step so thanks for that!

I did actually find the root cause of WHY the error happens, though it is challenging to explain. Fundamentally, you know how when you have some controls within a container in an app and click on a control, it actually selects the container first and not the control, and then you have to click the control a second time to select the control within the container? That's what is happening in the component, that's how we are editing the property that we are not supposed to be able to. I'm not sure on the exact sequence of events, but I THINK it was when copying controls from 1 component to another. Say the source control has a relative value for Y, pointing to another control. You copy that source control to another component, and obviously the Y property has an error because the related control doesn't exist. Clicking on the error icon for the control actually was selecting the 'container' first, which is the component itself, but since the error is for the Y property, it was giving access to that "hidden" property of the component. Selecting the error icon again, or the control, then changed to actually selecting the control rather than the component. Something very close to that anyway. I learnt to watch very carefully the 'selected control name' in the upper right, showing what you actually have selected rather than what you THINK you selected. It was either copy/paste between controls, or renaming the component (which then breaks lots of controls that reference the control properties). Could have been that last option now that I think of it, as I store a lot of X,Y control values in the component input property (records). Regardless, same thing, a control has an error for the Y property. Select the error icon/bubble, and it was selecting the container first (and it's Y property that we are not supposed to be able to access).