Gallery layout with both horizontal and vertical scrolling

I want to display some data in Grid view with 15 columns and around 500 rows. I am currently using Gallery Layout with vertical scrolling. But i need both the scrolls (Horizontal and vertical scrolling). Is there any way to achieve this?

You can always insert Gallery into Gallery.

If you mean that you want to have only one gallery with both Horizontal and vertical scrolling in PowerApps, then I think I cannot find one existing control in PowerApps so far.

You could post this idea in the PowerApps Ideas forum, so it might be considered for future releases.

Advocate I
In response to v-monli-msft

Is this control still not available ?

I have the same problem. 😕

My way, for now, is to copy the same screen into a "Pop up"  (gallery and details) and change de variables.

also, I added the next button to show the other half , it's working well but it doesn't feel like we wanted.

If you want floating controls that stay in place while the rest scrolls (kind of like a split screen in excel) just have static X positions for those controls while the others are calculated based on the slider position.

@GCConsult  - Could you possibly elaborate on the proposed workaround?

Button1 stays in place on the very left when you scroll

TextInput1 will always be directly to the right of Label1, and will move relative to Label1's movement

Dropdown1 will always be directly to the right of TextInput1, and will move relative to TextInput1 movement

Leave off the last control (as long as it is skinnier than the gallery.Width - static control width)

Gallery1.Width - (Button1.Width + Dropdown1.Width) calculates the space in the gallery between the static control and the last control when scrolled all the way to the right, making the scroll stop right when it hits the end of the right most control.   If you don't have a static control, it would just be - (Gallery1.Width - RightMostControl.Width)

The +27 at the end gives it room for the vertical scroll bar so it doesn't cover up the end of your rightmost control. 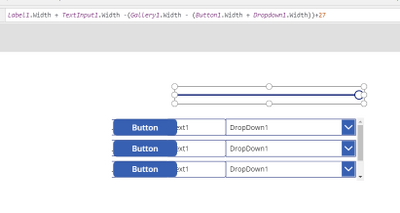 This is now possible with Vertical containers. 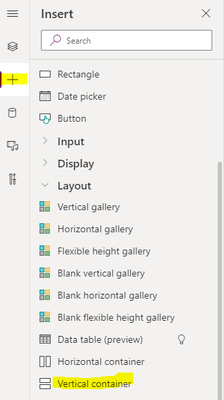 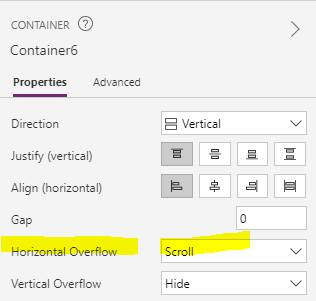 I am trying this and the gallery seems to match the container width but the row in the gallery doesn't seem to move past app width even though it is set to Parent.Width.  What am I doing wrong?